Mercedes-Benz has received a large order for 54 fully electric eCitaro buses from Basler Verkehrs-Betriebe (BVB). The decision was made following a tender and intensive testing of several vehicles.

The Swiss transport company wants to electrify its bus routes fully in just two steps by 2027. The eCitaro forms the basis of the first order, which comprises 38 eCitaro rigid buses as well as 16 articulated eCitaro G buses. The vehicles will be delivered in the coming year.

The urban buses for Basel are both technically and visually equipped to top standards. Both the rigid and the articulated buses are equipped with ten battery groups each. They can be charged either via a charging connector or rapidly by means of a pantograph with a charging output of up to 300 kW. 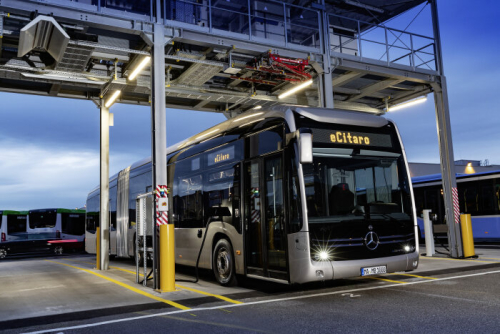 The articulated buses feature a driven central axle in addition to the driven rear axle. With the turning assistant Sideguard Assist, the active braking assistant Preventive Brake Assist and the TPM tire pressure monitor, BVB is also making a conscious decision for the highest level of safety. The buses are equipped with either three (rigid buses) or four (articulated buses) swivelling-sliding doors for rapid boarding and alighting of passengers.

The driver’s cab is separated from the passenger area by means glazed partition with openings for speaking to passengers and handing out change. Cabs will also be equipped with a swivelling, heated and climatized seat with multiple adjustment options, including an electrically adjustable lumbar support. A CCTV system provides an overview of what’s going on inside the bus, while a reversing camera assists the driver during maneuvering.

BVB facilitates mobility not only for the city’s inhabitants but also for those living in the greater Basel area—even connecting Basel with neighboring Germany and France. A total of 115 buses (of which the Citaro currently forms the backbone) serve 14 routes while 135 trams cover the company’s nine tram lines. In all, the buses reach an annual mileage of more than six million kilometers.