EIA: Average US retail gasoline price exceeds $3.00 for the first time since late 2014

Disruptions to Colonial Pipeline operations prompted an increase in the average US retail price for regular grade gasoline (retail gasoline price) to $3.03 per gallon (gal) on 17 May, the first time retail gasoline prices averaged more than $3.00/gal since 27 October 2014, according to the US Energy Information Administration (EIA). The average retail gasoline price in the Lower Atlantic (PADD 1C) increased 10 cents/gal from the previous week to $2.88/gal. 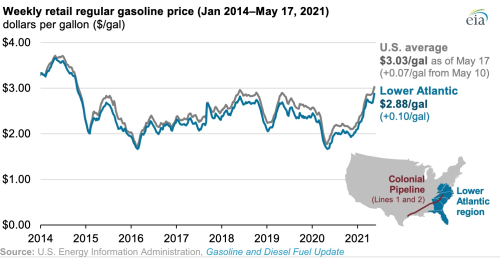 The increased retail price for gasoline in the Lower Atlantic resulted from outages at many gas stations in the region, which occurred because of the pipeline disruption that hindered supply and increased purchases of gasoline in response to the station outages.

Since demand remains constant, the energy companies are probably thanking the ransomeware bandits. They made them partners by paying them off, in fact.