Washington State University researchers have developed an innovative way to convert waste polyethylene plastic to ingredients for jet fuel and other valuable products, making it easier and more cost-effective to reuse plastics. 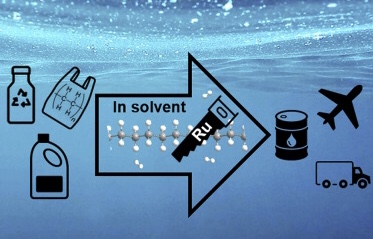 The researchers in their reaction were able to convert 90% of plastic to jet fuel and other valuable hydrocarbon products within an hour at moderate temperatures and to fine-tune the process easily to create the products that they want. Led by graduate student Chuhua Jia and Hongfei Lin, associate professor in the Gene and Linda Voiland School of Chemical Engineering and Bioengineering, they report on their work in an open-access paper in the journal Chem Catalysis.

In the recycling industry, the cost of recycling is key. This work is a milestone for us to advance this new technology to commercialization.

Polyethylene (PE) is the most popular plastic globally, and the widespread use of plastics has created severe environmental issues. The most common mechanical recycling methods melt the plastic and re-mold it, but that lowers its economic value and quality for use in other products. Chemical recycling can produce higher quality products, but it has required high reaction temperatures and a long processing time, making it too expensive and cumbersome for industries to adopt. Because of its limitations, only about 9% of plastic in the US is recycled every year.

In our report, the depolymerization of high-density PE was conducted in various liquid-phase solvents with the Ru/C catalyst under relatively mild conditions. The maximum yields of the jet-fuel- and lubricant-range hydrocarbons were 60.8 and 31.6 wt %, respectively. After optimization of the reaction conditions (220°C and 60 bar of H2), the total yield of liquid hydrocarbon products reached approximately 90 wt % within only 1 h. The product distribution could be tuned by the H2 partial pressure, the active-metal particle size, and the solvents. The solvation of PE in the different solvents determined the depolymerization reaction kinetics, which was confirmed by the molecular dynamics simulation results.

For the process, the researchers used a ruthenium on carbon catalyst and a commonly used solvent. They were able to convert about 90% of the plastic to jet fuel components or other hydrocarbon products within an hour at a temperature of 220 degrees Celsius (428 degrees Fahrenheit), which is more efficient and lower than temperatures that would be typically used.

Adjusting processing conditions, such as the temperature, time or amount of catalyst used, provided the critically important step of being able to fine-tune the process to create desirable products, Lin said.

With support from the Washington Research Foundation, the researchers are working to scale up the process for future commercialization. They also believe their process could work effectively with other types of plastics.

The work, which was done in collaboration with researchers from the University of Washington and Pacific Northwest National Laboratory, including Professor Jim Pfaendtner. It was funded by the Washington State Research Foundation and the National Science Foundation.