ADM and the University of Illinois announced the successful completion of the Illinois Basin - Decatur Project (IBDP), a carbon capture and storage (CCS) project designed to evaluate and test the technology at commercial scale. This is one of two CCS projects located adjacent to ADM’s corn processing plant in Decatur, Illinois.

Over three years approximately 1000 tonnes/day of carbon dioxide (CO2), obtained from ethanol production at the ADM plant, was compressed, dehydrated, sent along a 1.9-km pipeline, and injected into the Mt. Simon Sandstone 2.14 km deep in the Illinois Basin. Injection took place from 17 November 2011 to 26 November 2014, with 999,215 tonnes of supercritical CO2 injected and geologically stored. 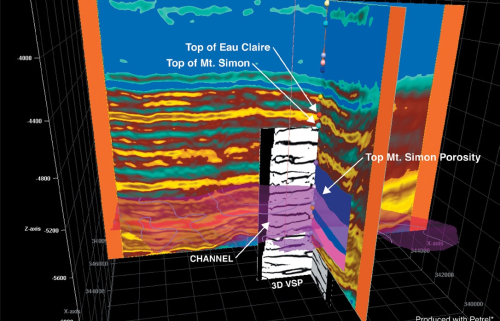 The project was primarily funded through the Midwest Geological Sequestration Consortium (MGSC) by the US Department of Energy – National Energy Technology Laboratory with the goal to confirm the ability of the Mt. Simon Sandstone to accept and store one million metric tons of carbon dioxide over the period—the equivalent of annual emissions from about 1.2 million passenger cars according to EPA calculations.

Working together through the MGSC, the Illinois State Geological Survey at the University of Illinois designed, implemented, and monitored the project and ADM was the host and operator.

More than 2,000 visitors from 30 countries have come to the site throughout the project to learn more about the process and technology.

The Illinois Basin - Decatur project has successfully achieved its desired outcome to demonstrate that carbon capture and storage can be undertaken safely and effectively. This milestone represents a launching point for the future of this technology, including commercial scale deployments around the world.

ADM also began injection operations at a second CCS project, the Illinois Industrial Sources Carbon Capture and Storage Project, in Decatur in April 2017. The project is currently permitted to operate through 2022 and has the potential to store up to 5.5 million metric tons of carbon dioxide.

Sequester as much as you can