With the collaboration beginning in 2020, the deployment leveraged C-V2X solutions provided by Qualcomm Technologies and Commsignia to test roadside units (RSUs) from Applied Information, which were mounted in flashing speed limit signs near school zones. A 2021 Audi e-tron Sportback electric SUV and a propane-powered Blue Bird school bus were also equipped with Qualcomm Technologies’ and Commsignia’s C-V2X solutions.

This initial deployment demonstrated that when active in school zones, the RSU is designed to send a direct, low-latency signal to the connected Audi, alerting the driver with a visual warning and audible signal to slow down. The technology can warn drivers when they’re entering an active school zone or approaching a school bus to reduce risks for children and vulnerable road users.

Similarly, when a Blue Bird school bus extends its stop arm, it alerts oncoming traffic that children may be entering or exiting a school bus. This is especially helpful on curvy or hilly roads where a driver might not be able to see the bus. Studies show that stop-arm violations—when a car drives past a stopped school bus illegally—continue to be one of the most significant dangers to children and other vulnerable road users around school buses with an estimated 17 million stop-arm violations in the US in 2019. 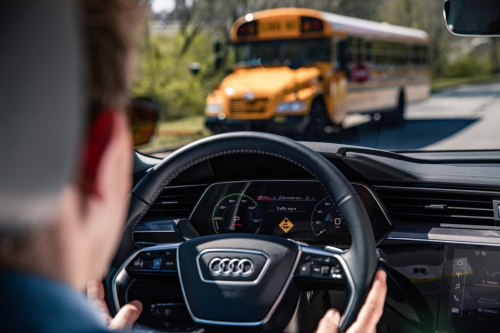 The initial deployment is taking place in Alpharetta, Georgia, an Atlanta suburb where Applied Information develops next-generation communications technology with connected infrastructure throughout its 78.5-square-mile testing zone, including more than 130 connected traffic signals.

The partners tested C-V2X through both LTE and 5G networks with the Fulton County School System, one of Georgia’s largest school districts. Together, the partners are fine-tuning this technology on closed courses at the Infrastructure-Automotive Testing Laboratory (iATL) facility and with buses and connected road signs in real-world traffic conditions in Alpharetta city traffic.

The ability to realize the potential safety benefits of C-V2X technology became possible following a US Federal Communications Commission (FCC) ruling reached in November 2020 and published in May 2021. In this decision, the FCC agreed to allocate a portion of the 5.9 GHz cellular band for C-V2X applications for the first time.

The decision paved the way for automakers to deploy standardized messages for vehicles to speak to one another, including the above school zone and bus use cases. Moving forward, the partners see significant opportunities to deploy C-V2X systems nationwide so that vehicle manufacturers, companies that create roadside infrastructure, and local authorities can deliver increased road safety that particularly benefits school children.

Additionally, vehicles with built-in infrastructure, such as the Blue Bird school bus used in this deployment, demonstrate how vehicles can communicate with road signs and traffic-control devices and opens up opportunities to use in different public vehicles, such as buses, emergency vehicles, and other service equipment.

Using algorithms developed by Audi and the Silicon Valley-based Volkswagen Group Innovation and Engineering Center California, technical teams from the partners are able to evaluate optimal warning times and distances for C-V2X to function to safely augment the driving experience.

Using direct vehicle-to-vehicle or vehicle-to-infrastructure C-V2X communication, a vehicle is able to pick up a basic safety message every 100 milliseconds, taking topography, time of day for school zones and indirect cell tower communications into consideration as well.

This technology can supplement cameras and sensors to read the road, allowing a future where truly automated driving will no longer rely on visible vehicles and road markings to help drivers move safely down the road.