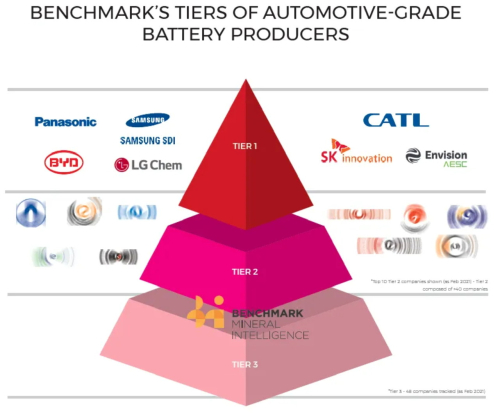 BYD is only the second Chinese lithium ion cell producer to reach the top tier after CATL, marking the first battery producer to be promoted since March 2020.

The company’s promotion to the top tier comes as it officially begins to distribute its cells to other OEMs through its commercial battery arm Fudi Battery (Fudi). Prior to Fudi’s formation in 2020, BYD reserved its in-house EV cell production exclusively for use in its own vehicles.

Benchmark noted that Fudi cells have been qualified by several automakers. In combination with BYD’s existing global EV and eBus manufacturer status, this meets Benchmark’s requirements to promote the company to Tier One status.

Benchmark said that BYD will offer nickel-based and LFP chemistries to its customer base through Fudi while continuing to focus on LFP cathode chemistries for its own electric vehicles.

To support its own requirements and that of its new and growing customer base, BYD is ramping capacity. Its most recent development was announced in April 2021, when the company said that it had started phase 2 expansion of its cell plant in the Bishan district of Chongqing, Sichuan, which is set to reach 35 GWh—a significant increase on its initial 20 GWh plan.

Data from Benchmark’s latest Lithium ion Battery Megafactory Assessment shows that BYD will have 170 GWh of capacity in the pipeline 2025, all of which will be concentrated within China.