If a ban were introduced on the sale of new gasoline and diesel cars, and they were replaced by electric cars, the result would be a significant reduction in lifecycle carbon dioxide emissions primarily due to reduced tailpipe CO2 emissions, according to a new lifecycle study by researchers at Chalmers University of Technology, Sweden.

However, the full effect of a ban is delayed due to fleet inertia. Further, risks of carbon leakage over the full vehicle lifecycle may need to be addressed by extending current regulations of vehicle-specific tailpipe emissions to also cover carbon footprints for new cars, the researchers said. 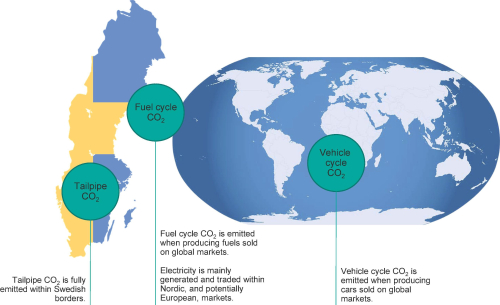 The researchers considered emissions from the entire lifecycle—from the manufacture of electric cars and batteries, to electricity used for operation. The total effect of a phasing out of fossil-fueled cars will not be felt until the middle of the century—and how the batteries are manufactured will affect the extent of the benefit.

The open-access results of the study—published in Transportation Research Part D: Transport and Environment—are based on Swedish conditions, but the method used by the researchers can be used to obtain corresponding figures for other countries, based on each country’s car fleet and energy system.

A rapid and mandatory phasing in of electric cars could cause emissions from Swedish passenger cars’ exhausts to approach zero by 2045. The Swedish government has proposed an outright ban on the sale of new fossil fuel cars from the year 2030—but that alone will not be enough to achieve Sweden’s climate targets on schedule, the researchers said.

The lifespan of the cars currently on the roads and those which would be sold before the introduction of such a restriction mean that it would take some time—around 20 years—before the full effect becomes visible.

To have the desired effect, a ban would either need to be introduced earlier, by the year 2025, or, if the ban is not brought in until 2030, then the use of biofuels in gasoline and diesel cars needs to increase significantly before then—in accordance with the revised Swedish “reduction obligation”. The combination of these two measures would have the effect of achieving zero emissions from passenger vehicles and keeping to Sweden’s climate targets.

The results from our study show that rapid electrification of the Swedish car fleet would reduce life cycle emissions, from 14 million tonnes of carbon dioxide in 2020 to between 3 and 5 million tonnes by the year 2045. The end result in 2045 will depend mainly on the extent to which possible emission reductions in the manufacturing industry are realized.

A transition from gasoline and diesel cars to electric cars will mean an increased demand for batteries. Batteries for electric cars are often criticized, not least for the fact that they result in high levels of greenhouse gas emissions during manufacture.

From a climate perspective, it does not matter where the emissions take place, and the risk with decisions taken at a national level for lowering passenger-vehicle emissions is that they could lead to increased emissions elsewhere—a phenomenon sometimes termed ‘carbon leakage’. In this case, the increase in emissions would result from greater demand for batteries, and the risk is thus greater the higher the emissions from battery production.

In that case, the Swedish decision would not have as great an effect on reducing the climate impact as desired. The lifecycle emissions would end up in the upper range—around 5 million tonnes of carbon dioxide instead of around 3 million tonnes. Due to this, there may be reason to regulate emissions in both vehicle and battery production, from a lifecycle perspective.

Within the EU, for example, there is a discussion about setting a common standard for the manufacture of batteries and vehicles—in a similar way as there is a standard that regulates what may be emitted from exhausts.

However, given Sweden’s low emissions from electricity production, a ban on sales of new fossil-fuel cars would indeed result in a sharp reduction of the total climate impact, regardless of how the manufacturing industry develops.

The year 2045 is highlighted because that is when greenhouse gas emissions within Sweden should reach net zero according to the climate policy goals of the country.

Fine for Sweden, if they want to transfer enough money from poorer people to the better off to get them to switch.

Materials supplies just can't be ramped up fast enough to allow that on a worldwide basis though, without even getting into electricity supplies for places like Europe from renewables.

' The metal resource needed to make all cars and vans electric by 2050 and all sales to be purely battery-electric by 2035. To replace all UK-based vehicles today with electric vehicles (not including the LGV and HGV fleets), assuming they use the most resource-frugal next-generation NMC 811 batteries, would take 207,900 tonnes cobalt, 264,600 tonnes of lithium carbonate (LCE), at least 7,200 tonnes of neodymium and dysprosium, in addition to 2,362,500 tonnes copper.

This represents just under two times the total annual world cobalt production, nearly the entire world production of neodymium, three quarters the world’s lithium production and at least half of the world’s copper production during 2018. Even ensuring the annual supply of electric vehicles only, from 2035 as pledged, will require the UK to annually import the equivalent of the entire annual cobalt needs of European industry.'

They might as well rely on dilithium crystals to enable their program.

It does not touch the real world at any point.

Davemart, if only the government overreach stopped there!
'Banning' combustion cars will hurt some people immensely. This is because BEV vehicles won't be able to cover the immense distances in North America some people have to drive. People who live in the prairies, and the rockies simply won't have the range. BEV vehicles are more expensive and can't be recharged fast enough for some people. Apartment dwellers may not have charging options.
'Banning' ICE cars will likely lead to all kinds of unforeseen issues, like battery disposal, electric grid disruption, and production hiccups. But the big lie is really exposed when you look for what share of ghg PASSENGER CARS actually cause, the 'factiod' they spew instead is 'TRANSPORT' ghg emissions. The inconvenience and economic hardship doesn't buy us much. Govt should be slowly transitioning us, not 'banning'.

Perhaps a more realistic solution is to lower the carbon footprint of the existing fleet using low-carbon, drop-in synthetic fuels, which could be produced with nuclear heat and power. Simultaneously, transition to a more electric fleet over time.

The popular myopic focus on renewables as the only visible solution to decarbonization is striking, considering the potential for clean, abundant nuclear energy is just sitting there mostly disregarded.

There is nothing wrong with seeking to electrify transport.

There is everything wrong with regressively giving breaks to the well off to buy very heavy, resource intensive luxury cars which accelerate unsuitably fast on the grounds that that will force through more economic batteries, when it is likely that radically different batteries made of cheaper materials will be needed anyway.

You could build 4 PHEVs with the same battery capacity as one BEV.
Might be a better approach if we are battery limited.
Also, if you use range extenders / dedicated gensets, the petrol side should be quite efficient.
Also, you could use biofuels or some low low carbon fuel type (methane / biomethane).
Obviosly a PHEV is not zero emissions, but 4 Phevs will have much lower emissions than one BEV and 3 ICEs.
Now, if only we could make PHEVs more cheaply ...

Maybe a 12 kWh battery and 1 or 2 of the 16 kW range extenders from Aquarius Engines or equivalent, running on whatever.

@SJC - exactly, and the combustion of the ICEs you have not replaced with BEVs will create a great deal more CO2 than the PHEVs or range extender BEVs that you have replaced.