EIA: US average gasoline prices before Memorial Day highest since 2014

The average retail price for regular gasoline in the United States on 24 May, the Monday before the Memorial Day weekend, was $3.02 per gallon (gal), the highest gasoline price before Memorial Day since 2014, according to the US Energy Information Administration’s (EIA’s) weekly Gasoline and Diesel Fuel Update. The average US gasoline price on 24 May was $1.14/gal higher than a year ago. 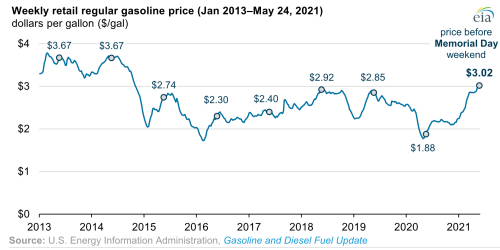 The American Automobile Association (AAA) expects more than 37 million people to take trips this Memorial Day weekend, traveling 50 miles or more from home between 27-31 May. Of those 37 million people, AAA expects 34 million of them to travel primarily by car, as opposed to planes, trains, or other travel modes. This automotive travel total marks a 52% increase from Memorial Day 2020, when only 23 million people traveled by automobile, the fewest since 2000, when AAA began estimating holiday travel.

Gasoline prices in some US markets have been more than $3.00/gal for several weeks. Of the nine states included in the weekly survey, California had the highest price, at $4.01/gal, as of 24 May. Washington State’s average gasoline price has been more than $3.00/gal since early March 2021 and most recently averaged $3.44/gal. West Coast states tend to have higher gasoline prices because of the region’s limited connection with other major refining centers, tight local supply and demand conditions, and more environmentally stringent gasoline specifications. 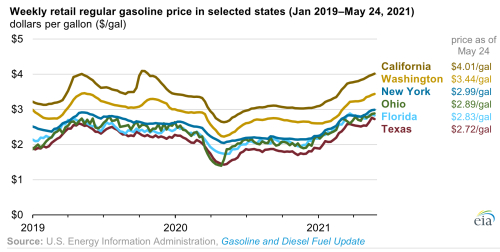 Texas continues to have the lowest gasoline price among the states included in the survey. Texas produces a relatively high amount of gasoline because it has more crude oil production and operating petroleum refining capacity than any other state, as well as relatively low state gasoline taxes.