Germany investing €8B+ in 62 large-scale hydrogen projects; “We are making Germany a hydrogen country” 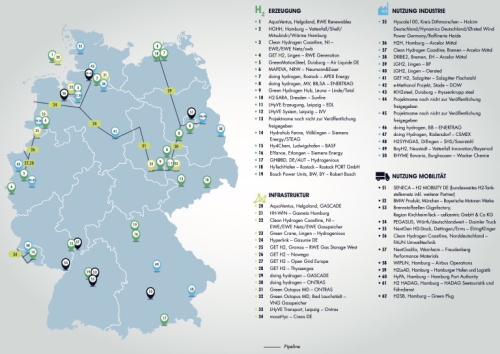 We are making Germany a hydrogen country. In doing so, we are rethinking mobility—European and holistic—from the energy system to drive technologies to the fueling infrastructure. Traffic is currently more than 95 percent dependent on the use of fossil fuels. We therefore urgently need mobility that relies on renewable energies. Green hydrogen and fuel cells are—across all modes of transport—a great addition to pure battery vehicles.

The fact is: we must and want to promote the switch to climate-friendly mobility urgently. In order to cover all areas of mobility with zero-emission solutions, we need technology openness. That is why we also support fuel cell technology as well as vehicle and component manufacturers, so as not to miss the boat internationally. Today we are taking a giant step towards climate-friendly mobility.

We want to become number 1 in the world in hydrogen technologies. To do this, we are pooling our strengths in Europe and initiating massive investments in the future technology hydrogen with the first joint European hydrogen project. That secures competitiveness and jobs—in Germany as well as Europe. We are providing more than 8 billion euros in federal and state funds for the 62 German projects selected today and, with the selected projects, cover the entire value chain—from hydrogen generation and transport to industrial applications. We are taking a big step on the way to making our economy climate-neutral. A central area for this is the steel industry as well as the chemical industry.

The €8 billion is made up of federal and state funds. Around €4.4 billion comes from the Federal Ministry of Economics and up to €1.4 billion from the Federal Ministry of Transport. The remaining funds are made available by the federal states. Investments totaling €33 billion are to be triggered, including more than €20 billion from private investors.

The 62 major hydrogen projects were selected from more than 230 project outlines received and represent the entire value chain of the hydrogen market.

In the BMWi department, 50 project outlines were selected. These include project sketches for generation plants that together comprise more than 2 gigawatts of electrolysis capacity for the production of green hydrogen. This corresponds to 40% of the target set in the National Hydrogen Strategy of 5 gigawatts by 2030.

Hydrogen pipeline projects will advance with a total length of around 1,700 km (1,056 miles). A particularly large amount of emissions can be saved in the CO2-intensive steel industry. ArcelorMittal, Stahl Holding Saar, Salzgitter Stahl and Thyssenkrupp SteelAll have submitted investment projects.

A number of innovative projects in the chemical industry use the CO2-free production of hydrogen for the production of ammonia or synthetic fuels for freight or air traffic.

The Federal Ministry of Transport is funding 12 projects in the mobility sector. These concern the development and manufacture of fuel cell systems and vehicles—from cars to trucks to municipal vehicles.

In addition, for example, the development of a nationwide and cross-border networked hydrogen refueling infrastructure is being promoted. Also, the aerospace and maritime sector is addressed.

And here is a proposal to extend hydrogen stations so that the whole of the Pacific coast of the US is accessible for FCEVs:

At an investment of $150 million or so, it seems very do-able with Hyundai and Toyota now starting to ramp supplies of FCEVs.

When you can purchase any of several 200-300 mile range battery electric cars for less than $40k, and 400 mile range EVs are available on the high end of the price scale, there’s very little reason for interest in a H2 car that has such limited fueling infrastructure.

Battery electrics, which you can charge overnight in your garage, or at thousands of fast chargers in shopping malls, have far more consumer appeal.

@ e-c-i:
You're so right but your conclusions do not bode well for big oil and all their appendixes. They're fighting their battle of existence with all means at their disposal. I fervently hope they fail.

Some here are confusing low volume trials to develop the technology with the release of products aimed at greater volume.

That is just starting.

Germany's going to need huge amounts of H2 if they're going to make their "all-renewable" scheme work.

And even then, it probably won't work.

It was lunacy for Germany to shut down their reactors, and they have been emitting hugely more carbon in consequence since.

They plan to import renewable hydrogen as ammonia from renewables rich places like the Gulf and Brazil to make up for what they can't produce:

The irony is of course that if you need hydrogen for steel and fertiliser production etc then a nuclear reactor is a great way of making it efficiently, as it improves the utilisation of the reactor improving the economics.

But reason does not come into it, as the notion that a nuclear reactor is no more dangerous than any other bit of heavy industry is too advanced for the greenloons to get their heads or deficient mathematical abilities around.

China is looking to use their new PBRs for hydrogen production as well as electrical output though.

When you compare the total cost of ownership of battery-electric with a hydrogen fuel cell vehicle, and then also compare the total user experience (driving dynamics, refueling convenience, etc) there’s no contest. FCVs have not been selling in volume because there is no compelling argument for their use. When EVs only had 70-80 miles range, and batteries at $1,000 per kW, an argument for H2 might have been made.

But with 250-350kW chargers being deployed widely, even the final remaining gossamer thread of an argument for FCVs, refueling time, unravels.

What some "green H2 enthusiasts" don't understand and perhaps never will is that with all the effort that is made to produce renewable energy, it is far to precious to waste whilst producing green H2. The complete H2 process (well to wheels) for e. g. FCEVs amounts to ca. 20% or even less. Unless H2 is produced from engineered bacteria instead of electrolysis etc. it is best forgotten. Only a proponent of big oil or their employees could hold such a waste of energy for a good idea.

Good for Germany! It's unfortunate that American companies have better results in obtaining developing business relationships that will build the future - quite literally - with their innovations in Europe instead of right here at home in the US. Here are two US companies leading the way in the EU on hydrogen:

I wonder why we as environmentalists are continually fighting the unnecessary battle between Battery vs Hydrogen? Our success as environmentalists depends on our cooperation and being solidly united and not in-fighting. H2-FC can be united with Battery in the grand scheme of Renewable Energy (RE) and Nuclear Energy (NE) to make a largely RE + NE economy practical.
The bottle-neck in long-range BEV production is in battery production. A Plug-in FCV (PFCV) would satisfy the ZEV mandate and yet would only require 1/5 to 1/10 the battery capacity of a long-range BEV, and would require only 1/2 to 1/3 the Fuel Cell capacity of a non-plugin FCV, if FC production should be a bottle neck in FCV production.

The limiting factor of RE deployment will soon be curtailment due to periods of RE excess, thus making no money for RE investors at that moment, and will reduce incentive for more RE growth. Nuclear Energy can also have the same issue due to its constant output in the face of fluctuating grid demand. By having a reliable market for Green H2 to avoid curtailment, the growth of RE will be unimpeded.
The 3rd limiting factor of BEV and Electricity growth would be in the limitation of the current electricity grid, if more and more BEV charging and electric heating appliances are going to take more out of our limited grid capacity. H2 home heating and H2-FCV using Green H2 during periods of peak grid demand would really save the day.
A PFCV only consumes 1/5 of the H2 quantity as would a FCV, thus would only incur 1/5 the cost of H2-filling infrastructure per vehicle as would a non-plugin FCV, while permitting H2 stations to be as far away as 30 miles from home. This would allow covering the entire USA with 500 H2 stations at the cost of under $1 Billion. This would make the lower efficiency and higher expense of H2 a moot point.
We don't have to choose between Battery or H2-FC, but use both battery and H2-FC TOGETHER. Electricity when we want it, and H2 when we need it.