Ammonia enables efficient, low-cost transport and storage of hydrogen. In addition to this role as an energy carrier, it can also be used directly as a fuel in thermal power generation. As a fuel that does not emit carbon dioxide when burned, ammonia is expected to offer advantages in reducing greenhouse gas emissions.

The demonstration project aims to establish ammonia co-firing technology by co-firing coal and ammonia at a large-scale commercial coal-fired power plant and evaluating both boiler heat absorption and environmental impact characteristics such as exhaust gases. The project will run for approximately 4 years from June 2021 to March 2025. 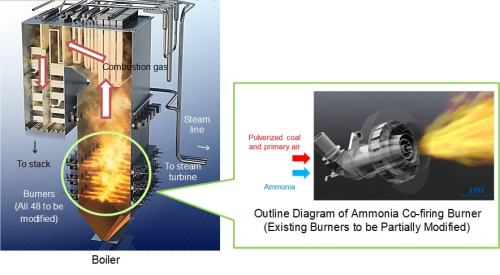 In the project, JERA and IHI plan to demonstrate an ammonia co-firing rate of 20% at Unit 4 of JERA’s Hekinan Thermal Power Station (power generation capacity: 1GW) in FY 2024.

JERA is in charge of ammonia procurement and construction of related facilities such as the storage tank and vaporizer, while IHI’s role is to develop the burners to be used in the demonstration. The two companies are moving forward with design and construction. 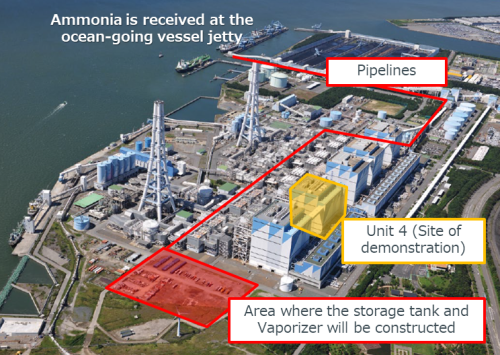 In addition, in order to ensure the reliability of high-volume ammonia co-firing, the two companies plan to verify the necessary parameters for developing the demonstration burners by conducting small-scale ammonia co-firing tests using burners of different materials at Unit 5 of the Hekinan Thermal Power Station (power generation capacity: 1GW) from August to December 2021.

Yara is one of the world’s largest producers of ammonia, a global leader in ammonia sales and shipping, and actively working to decarbonize the ammonia production process.

I wonder what they plan for NOx emissions?

It should still be shed loads more ecological than coal though, of course, and it is not sensible to let the perfect be the enemy of the good.

In a 2019 study by IHI, "New Technology of the Ammonia Co-Firing with Pulverized Coal to Reduce the NOx Emission", the injection method of the ammonia into the pulverized coal fired boiler was investigated experimentally and numerically. And it succeeded to reduce the NO concentration to be in the same degree with the conventional boiler.

of course 100% Ammonia would be better: "Mitsubishi Power Developing 100% Ammonia-Capable Gas Turbine", (https://www.powermag.com/mitsubishi-power-developing-100-ammonia-capable-gas-turbine/).
"To address NOx production, which is prompted by oxidation of ammonia’s nitrogen component through its combustion, the company’s commercialized gas turbine system will combine selective catalytic reduction (SCR) with “a newly developed combustor that reduces NOx emissions,” it said. That system will then be installed in the company’s H-25 series gas turbines (Figure 1), a model which Mitsubishi Power has commercially sold to utilities and industrial users since 1988. "

Informative as ever.
Kudos, and many thanks....

20% ammonia and 80% coal will still generate more CO2 than just using natural gas.
Also, they are proposing to use Blue ammonia, which is Ammonia made using carbon sequestration (presumably from steam reformed ch4). - Can you trust them to do the sequestration ? (I wouldn't)
Why not:
a: Burn the CH4 directly in a thermal or
b: Sequester the co2 from the coal fired power station directly or
c: Burn a mixture of green ammonia and Ch4.
and
d: sequester the CO2 from the power station.

Green ammonia I get, where you make the H2 from electrolysis from solar or wind (or nuclear),
I am very suspicious of anything that uses carbon sequestration - the temptation is to plough ahead before the sequestration is working and use it as a smokescreen.

There is a lot of temptation about.

Ruling technologies out on the grounds that people may miss-state and exaggerate would pretty much rule out most renewables for a start, as I have been reading overly 'optimistic' costs and assessments which did not pan out for the whole of my lengthy adult life.

This is the most assine thing I've heard this year. The ammonia is made using renewable electricity, and is then used with coal to make electricity. They should find find better uses for electricity and ammonia.