Total greenhouse gas emissions in the European Union (EU) decreased by 3.8% in 2019, according to latest official data published by the European Environment Agency (EEA). These data confirm the EEA’s preliminary estimates, published in October 2020. The large decline in emissions, achieved before the COVID-19 crisis, was mainly due to reduced coal use for power generation. 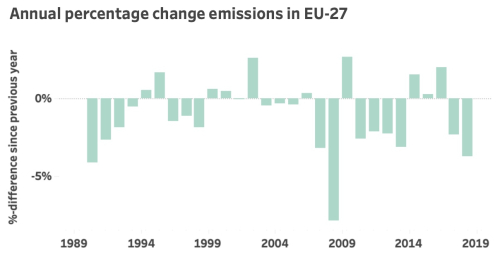 The official data, submitted on behalf of the EU to the United Nations Framework Convention on Climate Change (UNFCCC), show that EU Member States managed to reduce collectively their emissions by 3.8% from 2018 to 2019. This decrease brought EU emissions to 24.0% below 1990 levels, not accounting for carbon dioxide removals from land use, land-use change and forestry (LULUCF) activities. When these removals are included, the overall reduction from 1990 to 2019 amounts to 25.9%.

Almost 80% of the net reduction in emissions achieved in 2019 took place in the heat and power sector, which is covered by the EU Emissions Trading System (ETS). Increasing carbon prices and gas becoming relatively cheaper compared with coal led to a significant reduction in coal use, in favor of gas and renewable energy sources.

Emissions also decreased in other industrial sectors and residential buildings, the latter due to a warmer winter and lower demand for heating.

However, CO2 emissions from the transport sector continued their increasing trend in 2019. For road transport, the increase was mostly due to higher gasoline consumption in passenger cars. 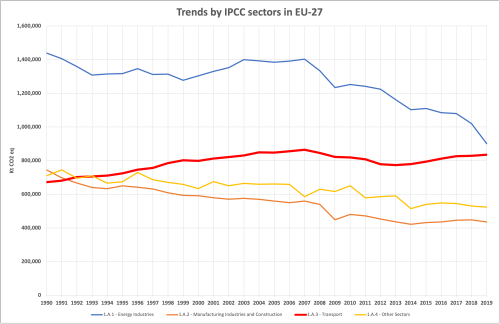 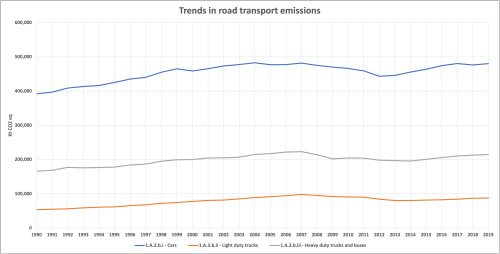 During the past three decades, several factors have contributed to the EU’s emission reductions, including the strong increase in the use of renewable energy, a switch from coal to gas in electricity and heat production, improvements in energy efficiency and structural changes in European economies. The decarbonization of the EU’s power sector has been the largest contributor to emission reductions since 1990.

The first EEA estimates of 2020 greenhouse emissions in the EU will be available in the autumn of 2021.