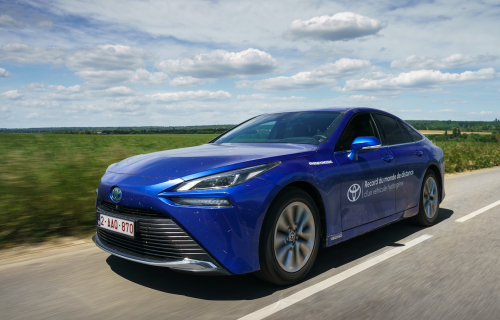 The journey started on 26 May at 5:43 am from the HYSETCO hydrogen station in Orly, France. The 1,003 zero-emission kilometers were driven on public roads, south of Paris and in the Loir-et-Cher and Indre-et-Loire areas. The distance & consumption were certified by an independent authority.

Green hydrogen was used during the record attempt. The average fuel consumption was 0.55 kg/100km, with Mirai being able to store 5.6 kg of hydrogen.

The new Mirai is the second-generation fuel cell electric vehicle from Toyota. It offers more performance, a sleeker and more dynamic design and new driving dynamics compared to the first-generation product.

In addition, the increased efficiency of the fuel cell system, together with higher hydrogen storage capacity and better aerodynamics, contribute to an increase of driving range to around 650 km (404 miles) under normal driving conditions, with less than 5 minutes refuelling time at a 700 bar refuelling station.

To achieve the 1003 km driving distance record, the drivers adopted an “eco-driving” style but no special techniques that could not be used by everyday drivers.

The 4 drivers that completed the record attempt included Victorien Erussard, the founder and captain of Energy Observer. Energy Observer, for which Toyota is a partner, is the first boat equipped with a Toyota fuel cell, is energy autonomous, zero emission and stands as a communication tool and as a research laboratory towards the energy transition. Energy Observer has now evolved into a company dealing with exploration and innovations. It recently presented its new exhibition village dedicated to renewable energies and hydrogen in Paris.

During that event, the Eifel Tower was illuminated for the first time by green hydrogen, using a GEH2 hydrogen generator developed by the EODev start-up organization, of which Toyota is a shareholder.

Can anyone find out what speed they were going at ?
I am going to guess 65-80 kph.
Anyone could do it, but you wouldn't get a lot of thanks from other motorists on the autoroutes / hightways / autobahns.

So drivers adopted an “eco-driving” or like Hypermiling a Prius. Some people have reached over 100 mpg doing this at ridiculously low speeds.
Other than PR there is not a lot here. Note: a Hyundai Nexo in Australia did a 887.5km trip from Melbourne to Broken Hill in 13 hours and six minutes at an average speed of 66.9km/h. Motor Trend in their review of the 2021 Toyota Mirai pointed out that fuel economy drops as speed increases.
A better test is Bjørn Nyland's 1,000 Km challenge in Norway. These are speed tests and any result under 10 hours (100 km/h) is good indicator of realistic range. Recently, an Audi e-tron GT did 1,000 Km in 9:25 hours. Another measure would look at Bjorn's challenge in terms of efficiency. A Tesla Model 3 LR Performance did 1,000 Km in 10:10 hours (98.4 km/h) @ 179 Wh/km - 179 kWh.
How much electricity would be required to generate the Toyota Mirai H2 at 98.4 km/h? This record probably needed 280kWh (5.6 kg @ 50kW/kg), probably a lot more at a speed of 98 km/h.

Question: why did they drive in a loop?
Answer: because they had to return to the only hydrogen filling station in 2,000 km.

Hypermiling does not impress me unless people do it on their daily commute.

What does impress me is producing a car that people are wildly enthusiastic about, which provides an unparalleled level of convenience; charging at home while you sleep, so you don’t even have to spend 5 minutes at the pump.

I am impressed by cars that have zero tailpipe emissions (not even water vapor) and save $17,000-$20,000 over the life of the vehicle in fuel cost savings.

Toyota is capable of that. Curious though, why they are tossing away a two decade time to market advantage.

"Curious though, why they are tossing away a two decade time to market advantage?"
I think that the answer to that is relatively simple.
Toyota ranks worldwide on second place right behind VW and that is an immensely huge output. All car companies were caught off-foot with the advent of Tesla especially the big two. Additionally, VW's millstone on their neck was diesel-gate and their sole hope for salvation was to follow the footsteps of Tesla.
Toyota, in comparison to VW, had long ago switched to hybrids, so they were not under the same time pressure as VW. Despite the threatening time element, Toyota was not in the same forcing time element as VW.
For both, the inevitable transition to EVs is a behemoth and costly task when considering their present manufacturing infrastructure. Toyota is counting on time that VW does not have.

That IS a good assessment, but there seems to be something else happening with their investment in FCEVs. VW has vocally and unequivocally rejected H2 as a pathway for passenger cars, and Toyota has doubled down with a new release of the Mirai.

I’m wondering if the Chairman is personally enamored with H2, sees the complexity as a barrier to entry, and no one is courageous enough to tell him otherwise, or the advise falls on deaf ears.

They can standardize and OEM to get economies of scale

True, SJC, but there is no way around the physics.

This has been well debated here on GCC and recently articulated in shorthand by VW’s CEO Diess.

Diess: “In transport, electrification has prevailed. Bogus debates are a waste of time. Please listen to the science!”

It remains a bit of a cypher why Toyota has invested substantially in H2 when the rest of the world is moving decisively toward BEV.

At very least, the consumer and the market, has indicated a strong preference for Tesla BEVs.