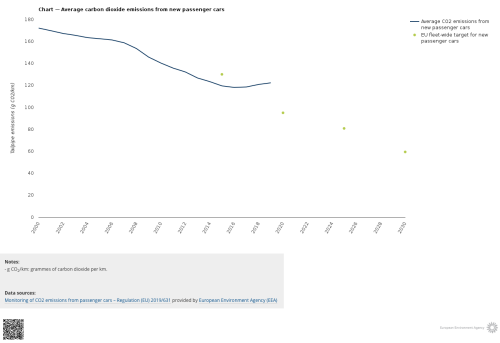 Key reasons include the growth in the sport utility vehicle segment and an increased average mass. Almost 15.5 million new cars were registered in 2019 in the EU, Iceland, Norway and the United Kingdom, and about 38% of these were SUVs. SUVs are typically heavier than other cars and have more powerful engines and larger frontal areas—all features that increase fuel consumption.

Most new SUVs registered were gasoline vehicles, with average emissions of 134 g CO2/km, which is around 13 g CO2/km higher than other new gasoline cars. Moreover, the average mass of new conventional cars, excluding SUV, increased by around 22 kg from 2018 to 2019.

2 or 3 things happened here.
a: People moved from diesel to petrol (mainly due to the VW scandal).
b: People moved to SUVs from hatchbacks and saloons (just fashion).
c: They switched from NEDC to WLTP as a way of measuring CO2. (Though I'm not sure how that is covered, if at all).
So it is a double or triple whammy for the EU car manufacturers, and has forced them to develop loads of EVs to try to get their fleet averages down.