SK Corp, the holding company of SK Group, has made a strategic investment in Monolith, a US company that has developed a plasma-based process to produce “cyan” hydrogen—between green (via electrolysis using renewable energy) and blue (conversion of methane accompanied by CO2 capture and storage).

As a strategic partner and leading investor, SK also secured a seat on the Monolith Board of Directors. Nextera, the largest power generation and renewable energy development company in the United States, also participated in the round.

Monolith’s cyan hydrogen is produced by injecting natural gas containing methane (CH4) as a main component into a high-temperature reactor and decomposing it into hydrogen (H2) and solid carbon (C). The solid carbon is processed into carbon black, the main component of tires, and sold. Because carbon dioxide is not generated during the production process, it is classified as a clean hydrogen process along with blue hydrogen and green hydrogen. 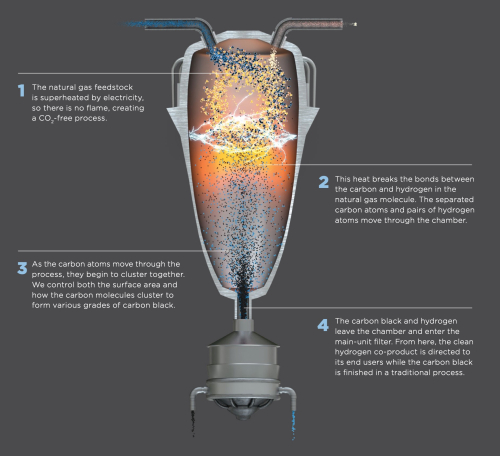 The competitiveness of cyan hydrogen is that it has both the economic feasibility of blue hydrogen and the eco-friendliness of green hydrogen. Because carbon dioxide is not generated during the production process, it does not have to go through the carbon capture and storage (CCS) process essential for blue hydrogen production, and it can be produced with less electricity than green hydrogen.

Monolith was founded in 2012, and completed the world’s first cyan hydrogen mass-production plant in June 2020. SK says Monolith is the only company with cyan hydrogen process technology that has entered the commercialization stage.

SK has also secured about 10% of a stake in US Plug Power, a global hydrogen leader, and became the largest shareholder. (Earlier post.)

This looks good.
The carbon is taken out as carbon, rather than CO2 and thus is easy to deal with (maybe even sell).
If they can pull this off, and it is efficient, we could be in business.

Imagine if you could use a similar approach to cooking the carbon out of CO2 rather than pretending to liquefy and bury it. (Energy balance might not be good).

Monolith uses the Kvaerner Process which is much more efficient than Electrolysis and also has a valuable byproduct-Carbon Black.
I guess they want to call it "Cyan Hydrogen" to distinguish it from the other "Blue Green" or Turquoise H2 which use Methane Pyrolysis.
Monolith is based in Nebraska which has significant Wind generated electricity.
This article from the Ammonia Energy Association "Methane splitting and turquoise ammonia" discusses the Monolith process and other "Blue Green" H2 generation processes (https://www.ammoniaenergy.org/articles/methane-splitting-and-turquoise-ammonia/).

Here's an article on energy and costs

Note that the electricity prices they are using are: "69 US$/MWh and 100 US$/MWh" which look very low by projected solar (and maybe wind) costs.
Note also that they expect to sell the carbon black and make a good deal of cash from that. It strikes me that if you start doing this at scale, the price of carbon black will nosedive as the supply increases hugely.
Still very interesting.

? Those prices are nowhere near the lowest bid prices for solar:

Some folk now are starting to talk in the same super-optimistic way about hydrogen as has been prevalent for batteries, with targets way, way in excess of the highest programs to date:

This is no Nikola, no startup pulling money for insiders from 'optimistic' investors, but a huge mining enterprise.

For context, the 15 million tons of green hydrogen they are targeting from Australia alone by 2030 compares to total world production of hydrogen mainly from SMR of 70 million tons or so.

This is big boy stuff.