United to buy 15 supersonic aircraft from Boom; option for 35 more; optimized for 100% SAF 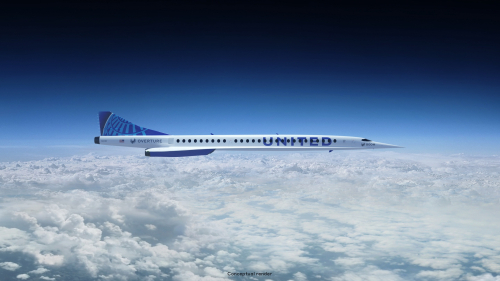 The companies will work together on meeting those requirements before delivery. Once operational, Overture is expected to be the first large commercial aircraft to be net-zero carbon from day one, optimized to run on 100% sustainable aviation fuel (SAF). It is slated to roll out in 2025, fly in 2026 and expected to carry passengers by 2029. United and Boom will also work together to accelerate production of greater supplies of SAF.

Capable of flying at speeds of Mach 1.7—twice the speed of today’s fastest airliners—at 60,000 feeet, Overture can connect more than 500 destinations in nearly half the time. Among the many future potential routes for United are Newark to London in just three and a half hours, Newark to Frankfurt in four hours and San Francisco to Tokyo in just six hours. Boom is working with Rolls-Royce on propulsion.

Overture will also be designed with features such as in-seat entertainment screens, ample personal space, and contactless technology. United says that working with Boom is another component of its strategy to invest in innovative technologies that will build a more sustainable future of air travel.

Overture’s order book, including purchases and options, stands at 70 aircraft; Boom is working with the United States Air Force for government applications of Overture.

Findings of a 2018 study by the International Council on Clean Transportation (ICCT) suggested that the new generation of supersonic aircraft in development by three US-based companies are unlikely to comply with existing international environmental standards for subsonic aircraft (earlier post).