Fukushima Prefecture and Toyota Motor Corporation have commenced discussions with various partners over building a city for a new future that makes use of hydrogen and technologies produced in Fukushima Prefecture. In order to further promote reconstruction, Fukushima Prefecture is focusing on hydrogen, a new form of energy, and has undertaken to build one of the first models for a future hydrogen society. 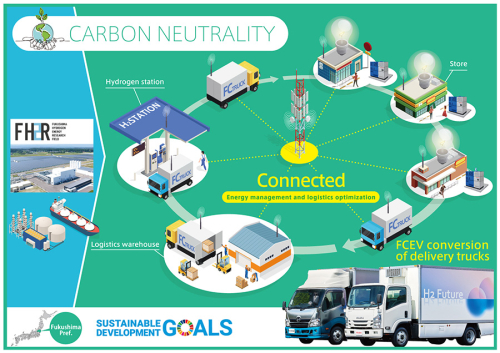 Isuzu, Hino, and Toyota all seek to realize carbon neutrality, and wish to contribute to the building of a new city of the future in Fukushima via their three-company partnership; consequently, Fukushima Prefecture, Toyota, and their partners will create an implementation model for hydrogen-based deliveries at supermarkets and convenience stores, which play a role both as essential urban infrastructure and as evacuation areas in times of disaster.

They will first build an implementation model for a city with a population of 300,000 people, before embarking on a challenge to apply the model to similar-sized cities nationwide.

The implementation model will make use of hydrogen produced at multiple sites in the prefecture, including Fukushima Hydrogen Energy Research Field (FH2R), introduce several fuel cell (FC) trucks for deliveries, optimize operational management and hydrogen refilling schedules through the use of connected technologies, and carry out energy management that caters to the prevailing local conditions.

In addition, in response to the needs and issues experienced by Namie Town―where FH2R is located―and other regions in the prefecture, Fukushima Prefecture, Toyota, and their partners will operate FC kitchen cars and medical cars, and use hydrogen at stores and plants in Fukushima Prefecture to reduce supply chain carbon emissions.

Participating partners, as of June 4, 2021 (in alphabetical order):