AqualisBraemar LOC has been appointed by Caledonian Maritime Assets Ltd. (CMAL) to partner in designing a hydrogen fuel-cell sea-going passenger and car ferry—a first for Europe. This is part of HYSEAS III, a Horizon 2020 funded project (earlier post).

HYSEAS III follows HYSEAS I and HYSEAS II, and aims to build on the previous projects’ findings by demonstrating that fuel cells may be successfully integrated with a proven marine hybrid electric drive system (electric propulsion, control gear, batteries etc.), along with associated hydrogen storage and bunkering arrangements. 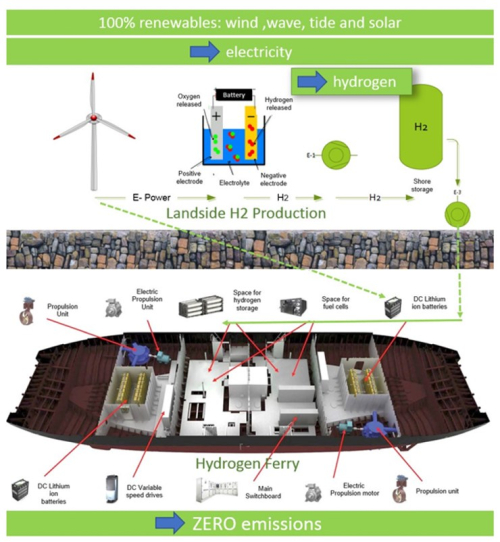 The HYSEAS III project will develop, construct, test and validate data in a full-sized powertrain system on land—a process termed a “string test”. This process is used to mitigate risk by fully validating the vessel’s powertrain prior to committing to full vessel build cost. Both stress and durability testing can be carried out with minimal risk.

The HySeas III string test will consist of the following components: 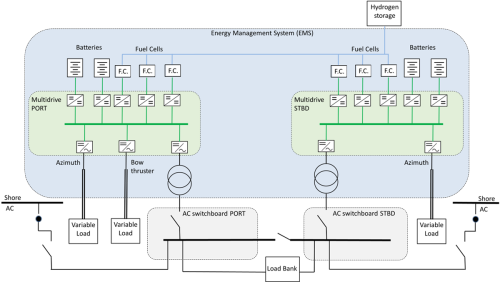 Partner Kongsberg Maritime designed the comprehensive testing regime to investigate whether the system would be suitable for handling and responding to demands that normally occur during normal sea-going operations. These operating profiles will include the expected load changes during three modes: transit, harbor, and maneuvering. The extended and exhaustive testing over several months is also intended to test safety, load response, transient response, and emergency situations of the system.

AqualisBraemar LOC’s scope of work is to design a double-ended sea-going passenger and car ferry capable of utilizing the hydrogen-powered drive-train and thereby running completely emission-free.

In recent years, AqualisBraemar LOC has developed a range of marine and engineering consulting services to support carbon-reduction initiatives in the maritime sector, including expertise in electrical engineering and alternative fuel integration for vessels.

The ferry will be designed around the requirements of Shapinsay in Orkney where hydrogen fuel is generated through wind power. The ferry—which will carry 16 cars or two trucks, and 120 passengers—will be capable of sailing to and from any concrete 1:8 slipway where hydrogen is available locally to power the vessel.

AqualisBraemar LOC operations in Aberdeen will work with CMAL, to ensure optimum sustainability in the overall vessel design, whilst delivering a design, which meets the highest level of safety and reliability for a lifeline ferry service.

The group will also draw upon its sister company, Longitude Engineering’s long track-record and reputation in vessel design, upgrade and conversions, to support the HYSEAS III project.