Oberon Fuels, producer of clean-burning dimethyl ether (DME) transportation fuel, has begun production of the first renewable DME (rDME) in the United States, and the only current commercial production of this in the world. Because rDME’s properties allow it to store and transport renewable hydrogen cost-effectively, this milestone unlocks Oberon’s ability to reduce emissions from transportation today, while potentially accelerating the development of the hydrogen economy.

As part of a $6-million project funded in part by a grant from the California Energy Commission (CEC), Oberon is converting waste methanol into rDME at its upgraded facility in Brawley, Calif. It is the first time this feedstock has been used to make rDME at commercial scale. In addition to waste methanol, other potential feedstocks include: biogas from dairy waste, food wastes, agricultural waste, as well as excess electricity and CO2, resulting in ultra-low carbon to carbon-negative DME. 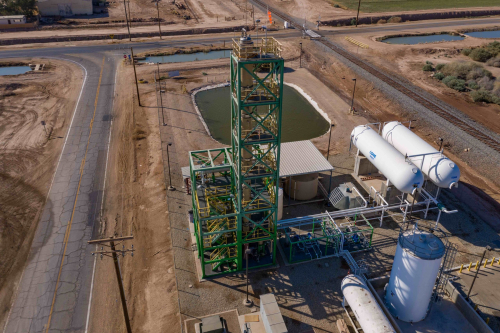 Our innovative approach uses waste resources to create a flexible molecule that can reduce emissions from fossil fuels, as well as create entirely new, super-clean fuels.

Renewable DME has multiple pathways to reducing the carbon footprint of the transportation sector: as a diesel replacement; as a blend with propane; and as an energy-dense, cost-effective way to move renewable hydrogen. rDME can help overcome some of the biggest barriers inhibiting the widespread use of hydrogen for transportation fuel, including: access to renewable feedstocks; modular, scalable production; and energy-dense, cost-effective storage and transport. Once delivered, rDME can be converted to renewable hydrogen at the point of use.

DME is a hydrogen-rich molecule that handles like propane, or liquefied petroleum gas (LPG). It can be produced at or near renewable feedstock sources using Oberon’s modular production technology. Oberon Fuels uses two standard production units to produce DME fuel for its partners. Utilizing the same core process, units vary depending on the feedstock used.

Moreover, because rDME is compatible with LPG, it requires minimal modifications to the existing global LPG distribution network and workforce, which have been safely handling and transporting similar molecules for more than a century.

Oberon’s production of renewable DME is not only a milestone for the company, it’s also a breakthrough for the global LPG industry as we seek new approaches to meet increasing customer and regulatory demands for cleaner fuels. Propane is already known for its versatile, cost-effective and clean burning attributes. Given the compatibility of these two molecules, we can immediately offer an even cleaner alternative for the transportation sector and beyond.

Additionally, the fact that we can use today’s propane infrastructure to move such a hydrogen-rich molecule that can become the hydrogen fuel of the future is both exciting and critical to our efforts to be innovative in achieving the goals of lowering carbon emissions.

Suburban Propane acquired a 39% equity stake in Oberon Fuels in 2020.

In 2013, Oberon Fuels’ refinery in Brawley, Calif., produced the first fuel-grade DME in North America, which has been used in Volvo Trucks, Mack Trucks and Ford vehicles for demonstrations around the world. Founded in 2010, Oberon Fuels is privately held with both private and strategic investors, including Suburban Propane.