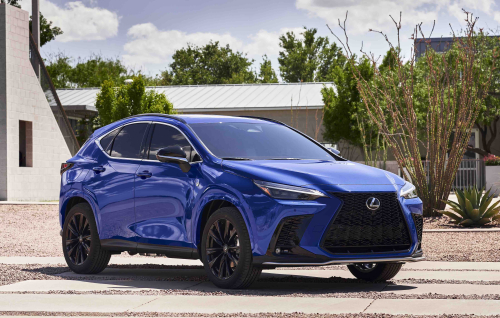 In 2014, Lexus launched the NX, based on the concept of “Premium Urban Sports Gear.” Since then, the luxury crossover has been well-received by customers for its agile driving performance and powerful design. As of the end of April 2021, the NX has sold a cumulative total of approximately 1 million units in more than 90 countries and regions, and together with the RX, has grown to become a core global model for Lexus.

The new NX is the first model to introduce the next generation of Lexus. In order to establish the unique driving experience to be found in future electrified vehicles, Lexus focused on thoroughly improving driving control, aerodynamics, and weight reduction.

The new NX uses the GA-K platform to achieve a lightweight, highly rigid body with a low center of gravity to enable superior handling. The basic performance of the vehicle has been greatly improved, and it inherits Lexus’ driving signature, which is faithful to the driver’s inputs with control surfaces tuned for a more linear response.

PHEV and HEV. The NX 450h+ PHEV has a manufacturer-estimated 36-mile range on electric power only, made possible by the newly developed, high-capacity lithium-ion battery. The system achieves the EV output equivalent to a 2.0-liter engine. When combined with the newly developed hybrid transaxle, a 2.5-liter inline 4-cylinder engine delivers an estimated 6.0 second 0-60 time. 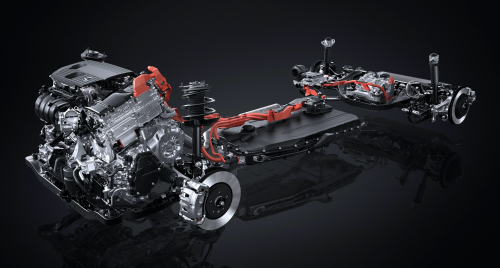 A high-output, high-efficiency system designed to reduce power loss when converting from AC power to DC power, results in shorter charging times. Using the maximum charging current of 240V, the Lexus NX plug-in hybrid can be fully charged in approximately two-and a-half hours when equipped with the optional 6.6 kW Expedited Onboard Charger. With the standard 3.3 kW on board charger, charge time goes up slightly to four-and-a-half hours.

The plug-in hybrid system used in the PHEV version of the NX is equipped with a thermally-efficient 2.5-liter inline-four engine, a 18.1 kWh, high-output lithium-ion battery, and front and rear motors.

The NX PHEV features AWD (E-FOUR) with constantly variable front-to-rear torque distribution between 100:0 and 20:80 percent modes. The high-capacity lithium-ion battery is placed under the floor to lower the center of gravity and help enhance handling and the overall driving experience.

The driver can alternate at will among the four driving modes (EV mode, AUTO EV/HV mode, HV mode, and Self-charge mode) at the touch of a switch. In HV mode, the engine and motor work together to achieve high acceleration performance. In addition, when AUTO EV/HV mode is selected with a destination inputted into the navigation system, Lexus’ first anticipatory EV/HV mode will automatically switch to HV mode on highways and other road conditions based upon data such as remaining battery power, route, and traffic information, all for the achievement of energy-efficient driving.

The Lexus Hybrid Drive system on the NX 350h pairs the D4-S fuel injection 2.5-liter 4-cylinder gasoline engine with two high-torque electric drive motor-generators for strong acceleration and passing performance. Instead of transfer gears and a driveshaft to the rear wheels, the AWD system employs a second, independent electric motor to drive the rear wheels when it detects it is needed to help maintain optimal traction. 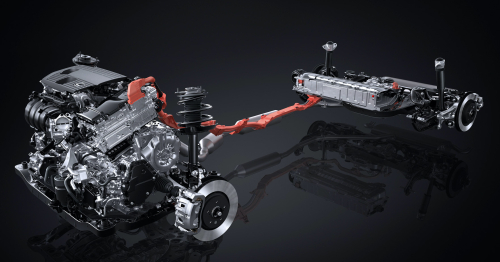 E-Four has a constantly variable front/rear driving force distribution from 100:0 to 20:80 percent modes. A FWD version will also be introduced to meet the diversifying needs of customers.

Highly rigid and lightweight body. Reinforcement braces and panels have been added to the suspension members and other parts of the vehicle to ensure that the driving force is optimized. The rigidity of the GA-K platform has been evolved by considering the cowl shape and increasing the structure’s plate thickness. The structure of the upper body benefits from an engine hood that adopts a twin-lock structure—a first for Lexus.

In addition to the annular structure, a high-rigidity structural foaming agent was placed effectively by CAE analysis in order to suppress matchbox deformation in the rear luggage opening. In addition to laser screw welding (LSW) and structural adhesives, laser peening technology has been newly developed for joining skeletons. Through their optimal placement, the bonding strength has been increased by extending the bonding length by about 35% compared to the conventional type.

Safety. The NX adopts the evolved Lexus Safety System +. By expanding the detection range of the millimeter wave radar and monocular camera, Lexus enhanced the performance of each function and added new functions to assist on ordinary roads. The aim is to prevent accidents, further reduce traffic fatalities and injuries, and ease the burden on drivers.

In addition, the NX is equipped with Advanced Park, an advanced driving support technology developed based on the Mobility Teammate Concept, to support safe, secure and smooth parking. Furthermore, a new function has been added to allow remote parking using a smartphone.

In addition, automatic door-opening cancellation (Safe Exit Assist), which is linked to the Blind Spot Monitor sensor and e-latch system, supports safe and secure exit. For added convenience, a digital key that allows the driver to operate the car from a smartphone is also available.

Lexus should be commended for the high technology update enacted to the NX. My opinion, however is that this attention should have been directed to a full BEV design. Toyota hesitates to embrace BEV development much to the detriment of society.

We can reduce CO2 emissions by 30% with hybrids, and by 80% with PHEVs. Both without the need for massive infrastructure overhaul and without the need for large batteries. While being cost-competitive with ICE vehicles. This is the right place to start and I'm glad Toyota sees that.

I meant to say "reduce petroleum consumption by 80%", not "reduce CO2 emissions by 80%". Electricity isn't free, of course.

Others are rushing to produce luxury BEV cars needing huge subsidies and mandates with immature and limited battery technology at the expense of the average motorist, much to the detriment of society.

Wealthy greenwashers are in hog heaven.

As soon as batteries are ready to do the job safely and economically Toyota will produce plenty of them.

@pdd,
You were correct the first time. Since I have Solar, a range challenged Nissan Leaf (40 miles range) which handles 90% of my driving. This Lexus or a Toyota Rav4 would definitely be at the top of my buy list.

PHEV is the fastest way to reduce pollution and pure electric vehicles can increase as battery technology develops. Solar chargers are the best option.

That's seriously true about PHEVs.  The base model of my car is rated at 26 MPG combined; my trip computer now says my lifetime average is above 130 MPG and climbing.