Under the terms of the MOU, NEO will closely engage with KMS to collaborate with the intent of pursuing solutions to remove the cost bottleneck associated with nanosilicon powders and to develop manufacturing capabilities to mass-produce low-cost nanosilicon powders at a scalable and commercially viable level for NEO’s proprietary silicon anodes. 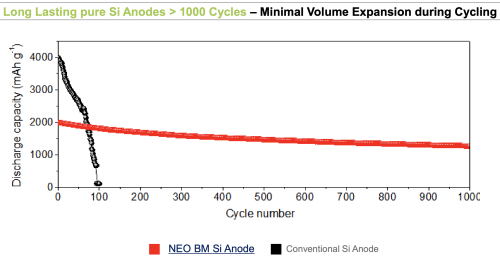 Dr. Jong Hyeok Park, Director and Chief Scientific Advisor, is currently leading the research and development of the silicon anode technology. Dr. Park was previously a Senior Researcher for LG Chem with a total of 92 patents and co-invented the world’s first safety-reinforced separator (SRS). He is currently a Professor of Chemical and Biomolecular Engineering at Yonsei University.

Korea Metal Silicon Co. has developed a lean manufacturing process over more than 15 years to provide cost-effective silicon powders that range from nanosilicon for lithium-ion batteries to polysilicon for semiconductors and solar-powered equipment.

KMS has been building a record of securing commercial supply contracts for its silicon powders from more than 20 companies located in South Korea and Japan. Additionally, KMS is engaged in multiple joint development agreements with established South Korean and Japanese companies to develop its silicon manufacturing process.

NEO also announced the commencement of the mapping and sampling program on its two wholly-owned silica projects south of Golden, British Columbia. The program should take two to three weeks with the samples sent to Bureau Veritas Minerals where they will be analyzed to confirm the percentage of silicon in the quartzite samples. The samples will be analyzed by 32 element inductively coupled plasma spectroscopy to confirm the purity of the silicon.

While the field program is in process, other possible sources will be examined and staked. Based on the results of the mapping and analyses, the company will examine the possibilities of using ground geophysics to map the strike of the quartzite units where they are covered by overburden.

Korea Metal Silicon is a manufacturer and supplier of MG-Si powder—the raw material of polysilicon, special alloy, and organic silicon. The company leverages a proprietary cost-effective process to produce a wide range of silicon powder materials.