Renewable hydrogen is an energy carrier produced from renewable sources such as wind and solar and can be used to replace fossil-based hydrogen for industrial processes or as alternative fuel in the transport sector, especially in heavy-duty and long-distance trucks, buses, ships and planes.

Renewable and low-carbon hydrogen cannot currently compete in terms of production costs with fossil-based hydrogen, whereas hydrogen production must become fully decarbonised in order to contribute to climate neutrality goals. Importing hydrogen from places with cheaper renewable energy resources could be an alternative to local production, but would result in higher transport costs.

Therefore, said the JRC, it is important to understand under which conditions transporting renewable hydrogen across the European territory or even over longer distances makes economic sense.

To investigate which renewable hydrogen delivery pathways are favorable in terms of energy demand and costs, JRC developed a database and an analytical tool to assess each step of the pathways, and used it to assess two case studies.

There is no single optimal hydrogen delivery solution across every transport scenario. The most cost effective way to deliver renewable hydrogen depends on distance, amount, final use, and whether there is infrastructure already available.

For distances compatible with the European territory, compressed and liquefied hydrogen solutions, and especially compressed hydrogen pipelines, offer lower costs than chemical carriers do. The repurposing of existing natural gas pipelines for hydrogen use is expected to significantly lower the delivery cost, making the pipeline option even more competitive in the future. By contrast, chemical carriers become more competitive the longer the delivery distance (due to their lower transport costs) and open up import options from suppliers located, for example, in Chile or Australia.

Unpacking chemical carriers accounts for a significant share of their total cost, mostly due to the processes’ high energy demand and the fact that unpacking plants are likely to be placed in locations with a relatively high electricity price. Optimization of unpacking processes has a key role to play in increasing the competitiveness of the chemical carrier pathways. 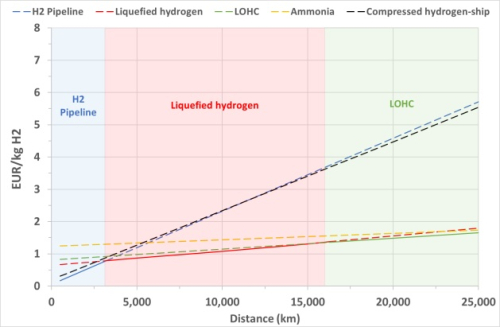 The policy brief recommends support to study the feasibility of this repurposing and improve and upscale current technologies involved in the hydrogen delivery chain.

The policy brief also recommends that the definition, certification and labelling of renewable hydrogen should include the full delivery chain, to ensure accurate tracking of the emissions associated with large-scale hydrogen delivery chains.

Background. In July 2020, the European Commission published “A Hydrogen Strategy for a climate-neutral Europe”. This policy communication sets out a vision of how the EU can turn clean hydrogen into a viable solution to decarbonise different sectors over time, installing at least 6 GW of renewable hydrogen electrolysers in the EU by 2024 and 40 GW of renewable hydrogen electrolyzers by 2030.

I'd give a shout out here to Kubas -1 hydrides, too.
If that works out, then certainly for local distribution options change.
Here is a pod cast I have come across with Professor Antonelli giving progress and the to do list.

The next stage in a couple of years is a 200g or so test tube for testing.

The 1g Lab work etc is basically done, with it handed over to the production engineers, those of Shell among them, with most of the other companies looking at it under NDA's.