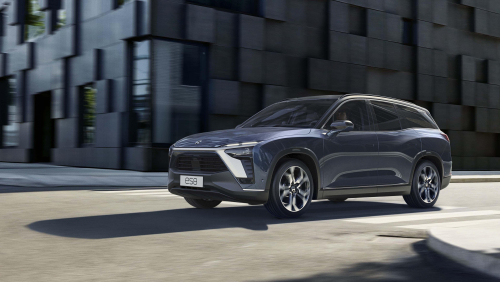 The ES8 features a full-aluminum body, with a 96.4% aluminum application rate—the highest percentage of aluminum used in an all-aluminum body in mass production vehicles worldwide, according to NIO. Due to its high fracture toughness, this allows absorption of crash energy through folding deformation; the center of gravity of the car is the battery. Vehicle torsional stiffness is 44,140 N·m/degree.

The NIO ES8 for Europe is officially approved for mass production and license plate registration in all EU countries. On 6 May, NIO announced its entry into Norway, NIO’s first overseas market. NIO will deliver its first model, the NIO ES8, in September this year.

Under Regulation (EU) 2018/858, the type approval certification was issued to the NIO ES8 and its systems, components, and separate technical units after corresponding engineering audits and module approvals. The EWVTA refers to the certification issued to a manufacturer for a vehicle type under the EU’s vehicle type-approval framework.

The Regulation (EU) 2018/858, effective since 1 September 2020, has become the new statutory regulation for vehicle type approval in the EU. The regulation improves the independence of quality and vehicle testing and surveillance of cars already in the EU market.

Japanese companies are going to be left behind as chinese will take over. Japan will keep running after hydrogen. Toyoto, suzuki, honda are too slow in ev itroduction.