GE Aviation and Safran launched a technology development program targeting more than 20% lower fuel consumption and CO2 emissions compared to today’s engines. The CFM RISE (Revolutionary Innovation for Sustainable Engines) program will demonstrate and mature a range of new, disruptive technologies for future engines that could enter service by the mid-2030s.

The companies also signed an agreement extending the CFM International 50/50 partnership to the year 2050, declaring their intent to lead the way for more sustainable aviation in line with the industry’s commitment to halve CO2 emissions by 2050.

Technologies matured as part of the RISE Program will serve as the foundation for the next-generation CFM engine that could be available by the mid-2030s. In addition to the lower fuel consumption goal, the team will work on ensuring 100% compatibility with alternative energy sources such as Sustainable Aviation Fuels and hydrogen. 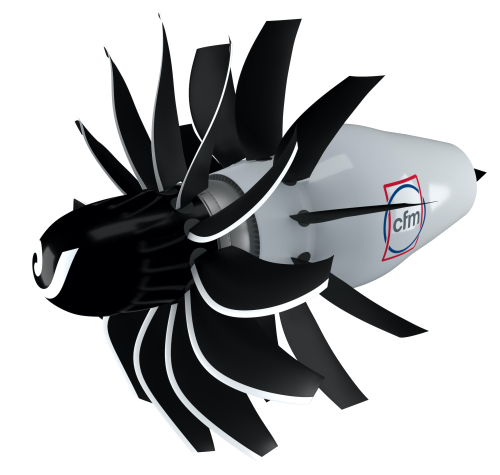 Central to the program is state-of-the-art propulsive efficiency for the engine, including developing an open fan architecture. This is a key enabler to achieving significantly improved fuel efficiency while delivering the same speed and cabin experience as current single-aisle aircraft. The program will also use hybrid-electric capability to optimize engine efficiency while enabling electrification of many aircraft systems.

The program is being led by a joint GE/Safran engineering team that has laid out a comprehensive technology roadmap including composite fan blades, heat resistant metal alloys, ceramic matrix composites (CMCs), hybrid electric capability and additive manufacturing. The RISE program includes more than 300 separate component, module and full engine builds. A demonstrator engine is scheduled to begin testing at GE and Safran facilities around the middle of this decade and flight test soon thereafter.

The original 1974 framework agreement creating CFM International as a 50/50 joint venture between the two aircraft engine manufacturers redefined international cooperation and helped change the course of commercial aviation. The partnership was renewed in 2008 for the launch of the LEAP program. Today, CFM is the world’s leading supplier of commercial aircraft engines with a product line that serves as the industry benchmark for efficiency, reliability and low overall cost of ownership. More than 35,000 CFM engines have been delivered to more than 600 operators around the globe, accumulating more than one billion flight hours.

Too little, too late.
Sustainable fuels prices will get driven up as the scam and scarcity of credits is depleted, and as carbon sinks get destroyed. H2 or NH3 will become more competitive.

"Too late" was also the verdict on this engine. Perhaps it could have been competitive with this "open fan" propeller.

Ironically, aerodiesels appear to be on the way back with engines like the Delta Hawk and the RED AO3.