Leclanché SA has developed a new generation of lithium-ion battery modules for energy-intensive e-transport applications, such as marine, commercial vehicle and railway, and simultaneously inaugurated a dedicated new production line for high volume manufacture in Europe.

The new modules, called M3, represent the next generation in Leclanché’s module production with an increased energy and power density compared to the company’s previous module generation. The new module is compatible with the full range of Leclanché cells: LTO 34Ah, G/NMC 60Ah and G/NMC 65Ah. 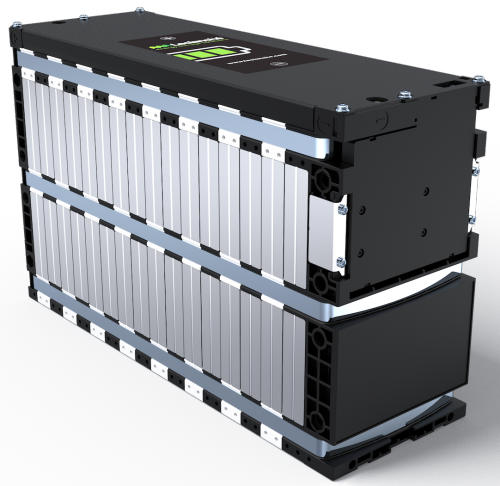 The modules feature a very-high cycle life of up to 20,000 cycles (LTO) or up to 8,000 cycles (G/NMC), allowing for significant reductions in total cost of ownership and making them ideal for commercial applications.

The modules are designed for a wide range of current and voltage outputs, going all the way up to 800A continuous current and for battery system voltages of up to 1,200V with its functionally safe BMS. The module and production line have been designed to accept a high level of flexibility in product configurations while maintaining production efficiency and traceability.

The M3 modules are designed to be fully compliant with the relevant transport certification standards for battery modules (selected configurations).

The modules are designed for a range of transport vehicles requiring high cycle life in both power and energy configurations and addressing commercial vehicles, rail and marine applications. The higher density G/NMC versions are used in the majority of transport applications whereas the LTO version is typically used where fast opportunity charging is needed such as for certain bus and AGV (Automated Guided Vehicles) applications and in hybrid hydrogen fuel cell systems used in certain trucks and trains.

The state-of-the-art highly automated production line was the result of a simultaneous engineering process with its partner Comau Spa (Stellantis Group), a leading global provider of industrial automation and robotic systems, based in Turin, Italy.

The line includes the latest technologies in terms of quality and process control setting the foundation for the transition towards Industry 4.0 principles. It will allow Leclanché to produce up to 500 MWh per year, and further expandable, representing more than six times the production capacity of the previous module generation—more than 60,000 modules per year when in full operation.

This positions the company among the first major manufacturer to produce both cells and modules at scale in Europe.