The rail industry is on the cusp of a sustainable transformation with the introduction of batteries and hydrogen to power locomotive fleets. Our FLXdrive locomotive, the world’s first 100-percent battery powered locomotive, has proven its potential to slash carbon emissions by up to 30 percent when operating at 6 MWh. But we can’t stop there. By working with GM on Ultium battery and HYDROTEC hydrogen fuel cell technologies, we can accelerate the rail industry’s path to decarbonization and pathway to zero-emission locomotives by leveraging these two important propulsion technologies. 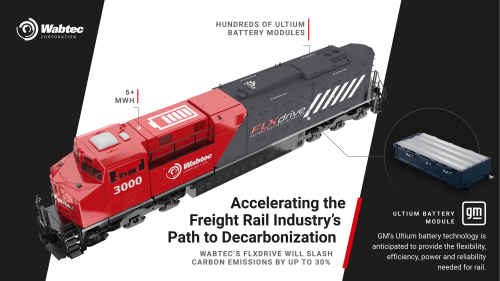 Wabtec and GM signed a nonbinding memorandum of understanding to advance the two companies’ shared vision of a zero-emissions future in transportation. Wabtec will bring its expertise in energy management and systems optimization to develop a solution for heavy-haul locomotives that takes full advantage of GM’s advanced technologies.

GM’s HYDROTEC hydrogen fuel cell power cubes are compact and easy to package and can be used in a wide range of applications, including locomotives. HYDROTEC fuel cell systems will be assembled from globally sourced parts by Fuel Cell Systems Manufacturing, LLC in Brownstown, Michigan, the manufacturing joint venture between General Motors and Honda.

In May, Wabtec announced that after a three-month pilot with BNSF, its FLXdrive battery-electric locomotive—functioning as one unit in a consist also containing two Tier 4 locomotives—delivered more than an 11% average reduction in fuel consumption and greenhouse gas emissions for an entire train—the equivalent of more than 6,200 gallons of diesel fuel saved and approximately 69 tons of CO2 emissions reduced. (Earlier post.)