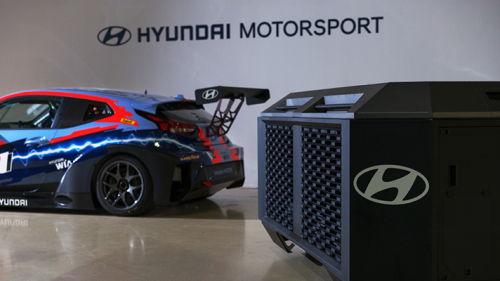 ETCR is the world’s first all-electric touring car race category that provides leading vehicle manufacturers a global stage to showcase electric technology in a high-performance arena. Only vehicles without internal combustion engines are allowed to participate.

The Group is not only entering its own racing team in the Pure ETCR championship but is also providing a mobile charging infrastructure that uses HTWO’s proprietary fuel cell generator to charge all participating high-performance EVs. The charging system can generate up to 160kW of electricity, offering an output equivalent to twice that of the NEXO, Hyundai Motor Company’s fuel cell electric vehicle (FCEV). The system can fully charge two ETCR vehicles—each equipped with a 65kWh battery—simultaneously within an hour.

The hydrogen mobile generation concept can also be implemented to supply power in remote areas where electricity is not accessible, or serve as an emergency power source for data centers and similar applications in the event of a power outage. ETCR will not only serve as a high-performance vehicle testbed for the Group to advance its electrification products but will also provide new business and market expansion opportunities for HTWO’s power generation technology.

Pure ETCR will be held for the first time in Vallelunga, Italy, from 18-20 June.