Autonomous electric buses could make short-range transit safer and more efficient; however, articulated buses or those with passenger trailers require too much energy and are not flexible enough to accommodate the highly fluctuating passenger numbers. The solution could be platooning, in which several vehicles follow each other at short distances, the vehicles being controlled electronically.

These platoons can be adapted as required to meet specific traffic needs. Researchers from Karlsruhe Institute of Technology (KIT) are working on a city bus platoon for Munich. 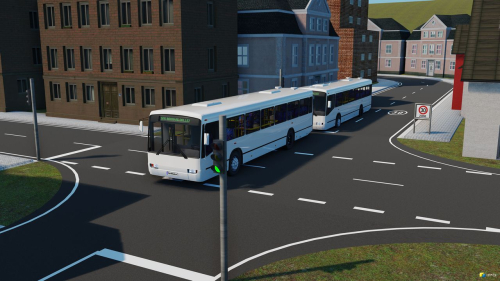 In platooning, vehicles are connected to each other via an “electronic tow bar”, and the platoon can thus be easily split and reconnected. (Graphics created with CarMaker by IPG)

Platooning allows us to optimally adapt bus operations to the demand— on the time of day or route—especially in the urban hinterland. Since the platoons can be split and connected as dictated by demand, we can provide a tailor-made service to our passengers.

In Munich, all buses will be replaced by electrically powered vehicles in the long term. In order to respond to fluctuations in demand for public transport on different days or at different times of day, passenger trailers have been used to date.

Electrified towing buses require enormous amounts of electric energy to move the trailers along, said Professor Eric Sax, Head of the Institute for Information Processing Technology (ITIV) at KIT. Motorizing the trailers would be neither cost nor energy efficient. On the other hand, a purely electronic and information-based coupling such as that used in platooning allows connecting complete buses instead of trailers.

We are currently developing the concepts for platooning city buses and then the corresponding algorithms for their automation.

These algorithms are then to be used in a bus prototype that KIT researchers will realize together with SWM and the Dutch electric bus manufacturer EBUSCO by mid-2022. It will be tested on the new test field for electrified and autonomous vehicles in short-range transit located in the north of the Bavarian capital.

The goal is to get the new vehicles on the road by the middle of the decade, said Sax.

The TEMPUS project (short for Munich test field—urban autonomous road traffic pilot experiment) with the project partners KIT, SWM, and EBUSCO, among others, started at the beginning of 2021 and is funded by the Federal Ministry of Transport and Digital Infrastructure (BMVI) with around €12 million for the duration of two and a half years. The Mobility unit of the City of Munich is in charge of the project.