In Russia, JSC Rusatom Overseas (a company of ROSATOM); Metalloinvest, a leading manufacturer and supplier of iron ore products and hot briquetted iron (HBI) in the world market, and one of the regional producers of high-quality steel; and Air Liquide signed a memorandum of understanding to study the possibility of organizing low-carbon production of hydrogen.

As part of the joint work, the parties plan to evaluate the technical and commercial aspects of a potential project for the production of environmentally friendly hydrogen for Metalloinvest factories located in Belgorod and Kursk regions.

Electrolysis of water using low-carbon electricity (“yellow” and / or “green” hydrogen) and steam reforming of methane in combination with carbon capture technologies (“blue” hydrogen) are considered as possible means for hydrogen production.

The agreement is an important stage in the implementation of Metalloinvest’s strategy aimed at reducing the carbon footprint of its products, said Nazim Efendiev, CEO of Metalloinvest. Metalloinvest is already looking at modernizing equipment to use up to 30% hydrogen as a reducing gas. The new metallization plant for Mikhailovsky HBI is being designed on the principles of carbon-free metallurgy, with the view to completely switch over to the use of hydrogen as a reducing agent for Direct Reduced Iron (DRI). (Earlier post.)

In the long term, Metalloinvest plans to switch completely to the use of hydrogen in metallization plants, and by 2025 sets itself the goal of reducing its own CO2-equivalent emissions by 6%. In 15 years, the holding’s emissions can be reduced by 77%. 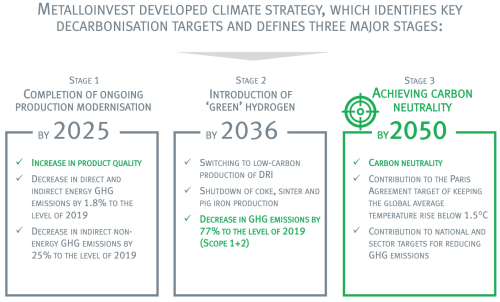 In February, Metalloinvest presented its qualitative change strategy, which is based on the fundamental principles of quality, environment, partnership and development. Strategic priorities are increasing sales margins, improving operational and managerial efficiency, and sustainable development. During phase one, until 2026, the plan is to bring the quality of iron ore to the level of international best standards, increase production of pellets, HBI/DRI, and expand the company’s presence in niche markets for steel products.