SSAB, LKAB and Vattenfall have now produced hydrogen-reduced sponge iron on a pilot scale. The technological breakthrough within the HYBRIT (earlier post) initiative cuts about 90% of the emissions in connection with steel production and is a decisive step on the road to fossil-free steel.

The test production was carried out in HYBRIT’s pilot plant in Luleå and shows that it is possible to reduce iron ore with fossil-free hydrogen, instead of removing the oxygen with coal and coke. The production has taken place continuously and with good quality. So far, about 100 tons have been produced. The trials will run through 2024. 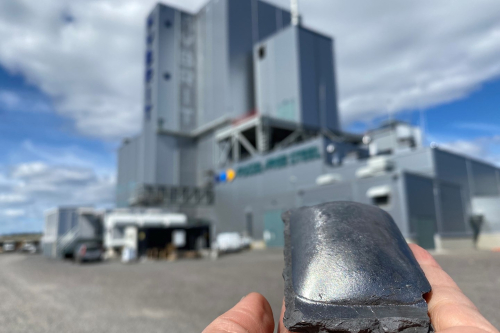 The pilot plant has a direct reduction shaft, where the reduction takes place, and a number of electrolyzers for the production of hydrogen using fossil-free electricity.

Direct reduction means that iron ore, which mainly consists of different iron oxides, is reduced to a porous, solid product of pure metallic iron—sponge iron—at temperatures below the melting point of the iron. The reduction involves removing the oxygen from the iron ore, which is a prerequisite for steel production. In a traditional process, this is done using carbon or coke, while in the HYBRIT process the reduction is done using fossil-free hydrogen.

This marks the first time that iron ore has been directly reduced with hydrogen produced with fossil-free electricity on a pilot scale. The ultimate goal is to eliminate carbon dioxide emissions from the process by fully using fossil-free inputs and fossil-free energy in all parts of the value chain.

Hydrogen reduction is a crucial milestone that paves the way for future fossil-free iron and steel production. Through HYBRIT, SSAB, LKAB and Vattenfall are creating an efficient value chain from mine to steel, with the goal of becoming the first in the world with fossil-free steel to market on an industrial scale by 2026.

Last year, SSAB’s, LKAB’s and Vattenfall’s jointly owned initiative HYBRIT started its test operations to produce hydrogen-reduced sponge iron in the pilot plant, which was built with support from the Swedish Energy Agency.

This technological breakthrough is a crucial step on the road to fossil-free steel. The potential cannot be underestimated. This means that we can meet the climate goals in Sweden, Finland and contribute to reducing emissions throughout Europe. It also creates jobs and export successes. With SSAB’s conversion, we will reduce carbon dioxide emissions by 10 percent in Sweden and 7 percent in Finland. With high-strength fossil-free steel, we also help our customers strengthen their competitiveness. Already this year, we will deliver small quantities of steel manufactured with hydrogen to the customer and in 2026 we will deliver fossil-free steel on a large scale.

The hydrogen gas used in the direct reduction process is produced by electrolysis of water with fossil-free electricity, and can be used directly or stored for later use. In May, HYBRIT began construction of a hydrogen scale on a pilot scale in connection with the pilot plant for direct reduction in Luleå.

The HYBRIT initiative was started in 2016 by the three owners SSAB, LKAB and Vattenfall. The pilot plant for test production of sponge iron in Luleå was put into operation on 31 August 2020; on 24 March 2021, Gällivare was chosen as the site for the planned demonstration plant for the production of fossil-free sponge iron on an industrial scale.

Processes like this used in steel, cement and fertiliser production are major sources of GHG, and deserve greater emphasis in relation to light transport, where electrification has taken and is taking an inordinate proportion of funds and subsidies.

Great observations from both of you.
as Davemart points out and verified by the EPA: Agriculture, Industry, Commercial/Residential account for 46% of GHG (https://www.epa.gov/ghgemissions/sources-greenhouse-gas-emissions).
Hydrogen and Fuel Cells could address all of these areas, e.g.
Green Ammonia, Fossil-free steel (the steel industry alone contributes 6%–7% of global GHG emissions), and FC CHP for Commercial/Residential.
A CHP example is the GKN Hy2Green System -their FC + Metal Hydride Storage claims 90% efficiency by capturing the thermal energy resulting from the two conversion processes for heating and hot-water.
(https://www.gknpm.com/en/innovation/hydrogen-technology/hy2green/?_ga=2.21959231.585610551.1624490431-200574956.1624490431).

@sd,
Good question.
Direct molten oxide electrolysis of iron (MOE) was demonstrated by Dr. Daniel Sadoway with support from NASA, the American Iron and Steel Institute, and the Deshpande Center at MIT over 10 years ago. Boston Metal which has financial backing from the Breakthrough Energy Ventures ,i.e. Bill Gates, etc.
According to Rocky Mountain Institute:
Both hydrogen direct reduction and molten oxygen electrolysis use electricity instead of coking coal as the main energy input, which means that the cost structure is exposed to completely different energy markets. Both technologies are indicatively competitive with prevailing blast furnace reduction—without a carbon tax—at electricity prices of $15–$30/MWh, which is a cost level at which renewable power assets are already performing.
Both processes use similar amounts of electric power. The capital costs appear to be lower for molten oxygen electrolysis depending on the electrode material.