The Mayor of London, Sadiq Khan, launched England’s first hydrogen double-decker buses. The 20 new buses are the first of their kind to be launched in England; the new hydrogen fuel cell double decker buses are first being introduced on route 7 between East Acton and Oxford Circus.

The buses were manufactured by Wrightbus in Northern Ireland, and the gas cylinders are manufactured by Luxfer in Nottingham. The hydrogen for the buses is currently being produced at Air Liquide’s plant in Runcorn, harnessing waste hydrogen as a by-product from an industrial chlor-alkali plant. Oxford-based Ryze Hydrogen is responsible for transporting the fuel to the fueling station. From 2023, the hydrogen will be even greener as it will be produced by electrolysis powered by a direct connection to an offshore windfarm. 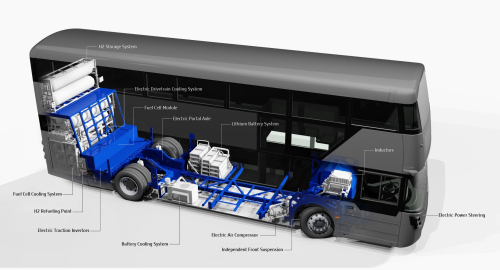 A new fueling station completed by Danish engineering firm Nel Hydrogen, in collaboration with multinational consultancy firm Linesight, will top up each hydrogen fuel cell bus just once per day in as little as five minutes. 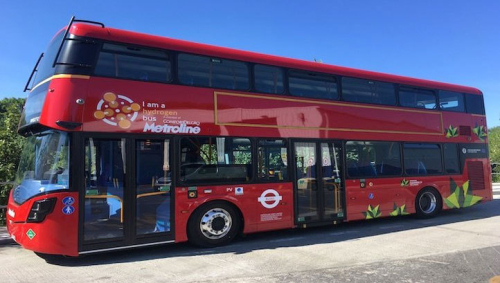 TfL has paved the way for cheaper hydrogen buses across the rest of the UK, having led the UK procurement within the Joint Initiative for Hydrogen Vehicles across Europe (JIVE), to buy in bulk with other UK authorities. In total, the JIVE project seeks to deploy 139 new zero-emission fuel cell buses and associated refuelling infrastructure across five European countries and has received funding from the Fuel Cells and Hydrogen Joint Undertaking.

Good to see fuel cell vehicles being deployed where their range and fast fuel capabilities make them the best ZEV option.

Of course, BEV only loonies who fancy that they can determine absolutely 'from first principles' what works in every climate and for every route and occasion won't like it.

There are a host of energy storage options, and what works where should determine what is deployed, not the fantasies of omnipotence of ideologues.

Excellent news! Battery only is ok for push bikes and scooters. Good to see that fuel cell tech is being recognised and used. Maybe we can start to manufacture hydrogen from tidal barriers and avoid hydrocarbon fueling completely? We are bleesed with having a tremendous amount of tidal energy of which we are currently chosing to use very little.

Don't have a problem with hydrogen made from a clean process. However, currently it is made mostly by reforming natgas...a process that is highly dirty and grossly polluting. An H2 fossil fuel refinery if you will.
Make H2 from clean stock, like H2O, and let the economics dictate it's usage. Right now, there are many investigating H2 usage on sea ships and aircraft which seem a good fit.
Let's see if H2 makes sense as a fuel for English buses.