German lawmakers recently created the basic framework for autonomous trucks to be used in logistics applications in defined operating areas in Germany.

MAN Truck & Bus and Hamburger Hafen und Logistik AG (HHLA) have been driving forward the Hamburg TruckPilot research and testing project since the end of 2018 to develop automation solutions. Following the preparation and test phase, the highlight was the practical test drives from the end of May, during which prototype trucks equipped with electronic automation systems ran in regular logistics operations. 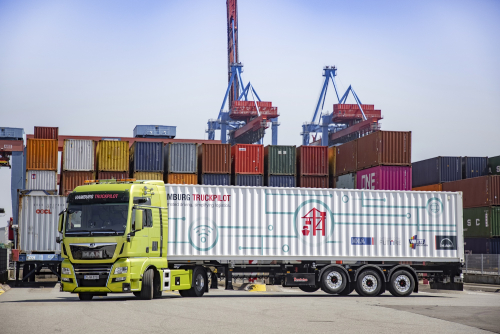 The involvement of the forwarding company Jakob Weets e.K. from Emden was important for the successful process. The logistics partner not only provided drivers, but also took care of the complete container handling and integrated the prototype trucks into their regular transport process.

During the respective practical trip, the Weets driver first transported a 40-foot container on behalf of VW Group Logistics from the Weets Container Terminal in Soltau to the Container Terminal Altenwerder (CTA) in the Port of Hamburg, about 70 kilometers away, in a completely conventional manner.

After the CTA check gate, the driver switched to the passenger seat and a safety driver climbed in instead, who had to be on board for legal reasons and could also intervene in the event that the test under prototype conditions required this.

The truck then drove autonomously across the terminal site to its correct position in the block storage lane and also maneuvered autonomously backwards into the correct parking position. After container handling, the return trip to the check gate was also autonomous, and beyond the terminal site, the driver of Spedition Jakob Weets e.K. again took full command.

—Till Schlumberger, project manager at HHLA and responsible for Hamburg TruckPilot

The project partners will present the detailed results of Hamburg TruckPilot at the ITS World Congress in October 2021.