Turkey has begun work on Canal Istanbul, a $15-billion canal project intended to relieve pressure on the Bosphorus Strait, with the ground-breaking for the first bridge. The canal, which will connect the Black Sea with the Sea of Marmara—and thence to the Aegean and Mediterranean seas—is aimed to manage the ship traffic of Istanbul and to raise Turkey to a leading position in the world’s trade corridors. 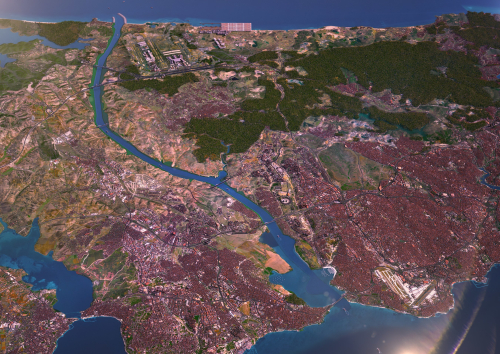 The Turkish Straits, which include the Bosphorus and Dardanelles waterways, divide Asia from Europe. The Bosphorus is a 17-mile waterway that connects the Black Sea with the Sea of Marmara, and the Dardanelles is a 40-mile waterway that links the Sea of Marmara with the Aegean and Mediterranean Seas. Both waterways are located in Turkey and supply Western and Southern Europe with oil from Russia and the Caspian Sea region. The US Energy Information Administration (EIA) identifies the Bosphorous as one of six key world chokepoints.

The Bosphorus, through which approximately 43,000 ships pass annually, is a natural waterway with a narrowest point of 698 meters. According to the data in recent years, ships in the Bosphorus wait approximately 14.5 hours each time they pass. In some conditions, this waiting period can be 3-4 days.

The increase in tonnage in ship traffic, the increase in ship sizes as a result of technological developments, and the increase in the number of ships (tankers) carrying fuel and other similar dangerous/toxic substances pose a great pressure and threat on Istanbul, according to Turkey.

According to a report by Reuters, a survey suggests most citizens oppose the project, as does Istanbul Mayor Ekrem Imamoglu and the opposition CHP party, to which he belongs. Critics say it would destroy a marine ecosystem and endanger some of the city’s fresh water supply.

Senior bankers told Reuters in April that some of Turkey’s biggest banks were reluctant to finance the canal due to environmental concerns and the investment risks.