Argonne report finds most battery cells and packs for US light-duty PEVs produced domestically from 2018 to 2020; due to Tesla/Panasonic

More than half of all battery cells used in plug-in electric vehicles (BEVs and PHEVs) since 2010 have been produced in the US, as have nearly 90% of all battery packs, according to a recent study of the Li-ion battery supply chain by a team at Argonne National Laboratory. 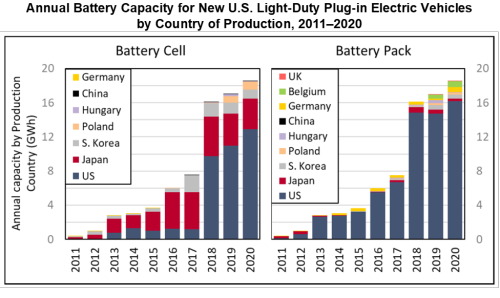 This trend toward domestic production has grown over time, with 70% of battery cells and 87% of battery packs produced in the US in 2020. Most of this production is for battery electric vehicles (BEVs) rather than plug-in hybrid vehicles (PHEVs), because of the larger capacity intrinsic to BEVs as well as the greater diversity of manufacturers of PHEVs. However, the large share of domestic production is due to a single player: Tesla/Panasonic. 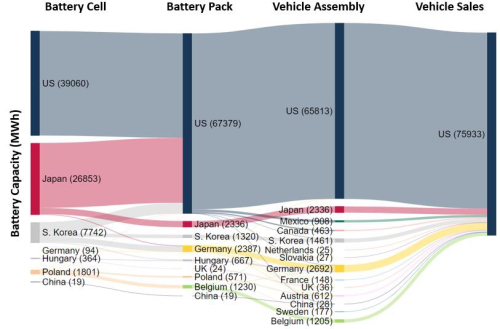 Total capacity (MWh) of Li-ion batteries supplied to the US PEV market by production location, 2010–2020. The report uses Sankey diagrams to show evolving trends of the supply chain for the production locations and original equipment manufacturers (OEMs) of battery cell, battery pack, and vehicle assembly from 2010 to 2020. Zhou et al.

The report finds that based on announcements made by major battery supply-chain companies, total US battery production capacity could increase to about 80 GWh per year by 2023.