Researchers working on the Faraday Institution project on the recycling of lithium-ion batteries (ReLiB) at the Universities of Leicester and Birmingham say they have solved a critical challenge in the recovery of materials used in electric vehicle batteries at the end of their life, enabling their re-use in the manufacture of new batteries.

The new method, which uses ultrasonic waves to separate out valuable material from the electrodes, is 100 times quicker, greener and leads to a higher purity of recovered materials relative to current separation methods. 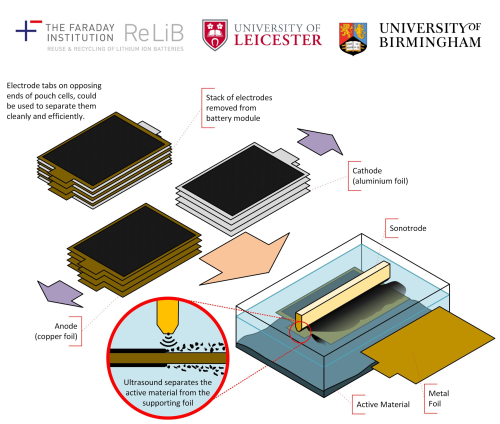 The open-access research has been published in Green Chemistry and the team have applied for a patent for the technique.

To ensure the environmental and economic benefits from EV batteries are fully realized, Faraday Institution researchers have been focused on the life cycle of the battery—from first production to re-use in secondary applications to eventual recycling. One key stumbling block has been in materials segregation—how to remove and separate the critical materials such as lithium, nickel, manganese and cobalt from used batteries in a fast, economical and environmentally-friendly way.

The ReLiB team in Leicester and Birmingham devised a novel ultrasonic delamination technique that blasts the active materials from the electrodes leaving virgin aluminum or copper. This process proved highly effective in removing graphite and lithium nickel manganese cobalt oxides (NMC). Materials recovered using the technique were found to have higher purity, and therefore higher value, than those recovered in conventional recycling approaches and are potentially easier to use in new electrode manufacture. The approach is fast and adapts technology in widespread use in the food preparation industry.

This novel technique works in the same way as a dentist’s ultrasonic descaler, breaking the adhesive bonds between the coating layer and the substrate. It is likely that the initial use of the technology will use production scrap from battery manufacturing facilities as the feedstock and feed recycled material straight back into the battery production line, possibly at the same site. This could be a real step change in battery recycling.

Current delamination recycling techniques use concentrated acids in a batch immersion process. The new ultrasonic technique is a continuous, feed process that uses water or dilute acids as the solvent so the technique is greener and less expensive to operate. It can delaminate 100 times more electrode material in a given time and volume than existing batch delamination techniques.

Researchers are in initial discussions with several battery manufacturers and recycling companies to place a technology demonstrator at an industrial site in 2021, with a longer-term aim to license the technology. The research team at the Universities of Leicester and Birmingham have tested the technology on the four most common battery types and find that it performs with the same efficiency in each case.

Background. Current recycling methods for lithium-ion battery recycling typically feed end-of-life batteries into a shredder or high-temperature reactor. A complex set of physical and chemical processes are subsequently needed to produce useable materials streams of the lithium, cobalt, nickel and copper they contain. Such pyrometallurgical and hydrometallurgical recycling routes are energy-intensive and inefficient.

If an alternate approach is taken and end-of-life batteries are disassembled rather than shredded there is the potential to recover more material, in a purer state, so recovering materials with greater value than current approaches. The disassembly of lithium-ion batteries has been shown to recover a high yield (around 80% of the original material) in a purer state than was possible using shredded material.

However, for disassembly to be used, battery cells, modules and packs must be designed for recycling so that cells can be disassembled, and their anodes and cathodes separated at the end of the battery’s first life. Battery disassembly is currently carried out at a scale of 100,000 tonnes/year in recycling facilities in the Far East. However, the majority of other battery manufacturers currently glue battery components together during manufacture for increased stability, but this makes them unsuitable for disassembly and high value recycling processes.

Some automakers are realizing the importance of recycling considerations in product design as a necessity in creating a circular economy for battery raw materials. Design for recycle aims to work with manufacturers to bring about minor changes to product structures so that raw materials can be returned more easily to the manufacturing process at potentially half the cost compared with primary sources.