Researchers at the US Department of Energy’s Pacific Northwest National Laboratory (PNNL) have created a lithium-metal battery that lasts for 600 cycles, far longer than other reported results. It can be fully charged and discharged 600 times before it dies. A paper on the work is published in the journal Nature Energy.

While that marks a big step forward for a promising technology, lithium-metal technology is not yet ready for prime time. While the lithium-ion batteries used in electric vehicles today hold less energy, they last longer, typically at least 1,000 cycles. But vehicles won’t go as far on one charge as they would with an effective lithium-metal battery.

The new research was done through DOE’s Innovation Center for Battery500 Consortium, a multi-institution effort led by PNNL to develop electric vehicle batteries that are lighter, more energy intensive and less expensive than those currently used. PNNL leads the consortium and is responsible for integrating the latest advances from partner institutions into devices known as high-energy pouch cells and demonstrating improved performance under realistic conditions.

The PNNL team found a way to increase the battery’s lifetime by using thin strips of lithium—just 20 microns wide—rather than just using anodes with more lithium.

Many people have thought that thicker lithium would enable the battery to cycle longer. But that is not always true. There is an optimized thickness for each lithium-metal battery depending on its cell energy and design.

The lithium-metal battery created by the Battery500 team has an energy density of 350 watt-hours per kilogram (Wh/kg)—very high but not unprecedented. The value of the new findings has more to do with the battery’s lifetime. After 600 cycles, the battery retained 76% of its initial capacity. 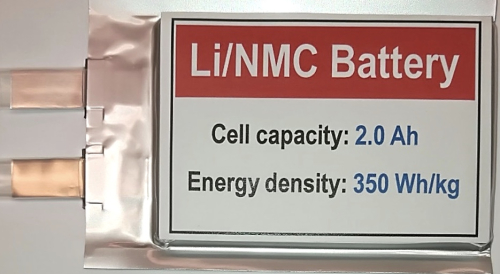 Just four years ago, an experimental lithium-metal battery could operate for 50 cycles. That has increased rapidly; two years ago the PNNL team achieved 200 cycles—and now 600. Moreover, the PNNL battery is a pouch cell, which more closely mirrors real-world conditions than does a coin cell, a less realistic type of device used in many battery research projects.

The team’s decision to try thinner lithium strips was based on its detailed understanding of the molecular dynamics of the anode as explained in the Nature Energy paper.

The scientists found that thicker strips contribute directly to battery failure due to complex reactions around the solid electrolyte interphase (SEI) film on the anode. The SEI is the byproduct of side reactions between lithium and the electrolyte. An SEI working effectively allows certain lithium ions to pass through but limits unwanted chemical reactions that reduce battery performance and accelerate cell failure.

The team found that thinner lithium strips are adept at creating what one might call good SEI, while the thicker strips have a higher chance of contributing to what one might call harmful SEI. In their paper, the researchers use the terms “wet SEI” and “dry SEI.” The wet version retains contact between the liquid electrolyte and the anode, making important electrochemical reactions possible.

But in the dry version, the liquid electrolyte doesn’t reach all of the lithium. Simply, because the lithium strips are thicker, the electrolyte needs to flow into deeper pockets of the lithium, and as it does so, it leaves other portions of the lithium dry. This stops important reactions from occurring, effectively smothering necessary electrochemical reactions, and contributes directly to the early death of the battery.

The left image shows electrolyte (blue) filling a pocket within a thin lithium anode, creating an effective, wet SEI (green). The right image shows what occurs with a thicker lithium anode: The electrolyte must go deeper, depleting most of the electrolyte and resulting in an SEI that is largely dry and ineffective. (Animation by Mike Perkins | Pacific Northwest National Laboratory)

It’s an important issue, especially in realistic batteries such as pouch cells, where the amount of electrolyte available is 20 to 30 times less than that used in experimental coin cells.

The work was funded by DOE’s Office of Energy Efficiency and Renewable Energy’s Vehicle Technologies Office. Much of the microscopy to evaluate the battery was done at EMSL, the Environmental Molecular Sciences Laboratory, a DOE Office of Science user facility located at PNNL.

Use less lithium to get greater energy density. That’s movement in the right direction. Almost certain to eventually result in lower cost per kWh. When people predict battery cost unable to fall below $100 /kWh, this decade, I’ll point to this article.

Bravo to Niu, Liu, Lochala the rest of the PNNL team.

They're plating lithium on copper in battery first charge