The generator that will be at the heart of the most powerful hybrid-electric aero power and propulsion system in aerospace has arrived for installation at Rolls-Royces’s specialist testbed. 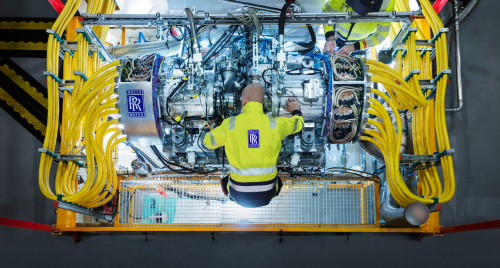 The generator and related 3,000-volt power electronics system was delivered to the newly-renovated Testbed 108 in Bristol, UK, from the Rolls-Royce facility in Trondheim, Norway, having completed an extensive development test program. It will form part of the 2.5 megawatt (MW) Power Generation System 1 (PGS1) demonstrator program for future regional aircraft.

In addition to hybrid-electric propulsion, the generator could also be used as part of a “more-electric” system for larger aircraft or within future ground or marine applications.

We are excited to bring the generator to our new testbed and start fully integrating PGS1. This is a key milestone in the program, bringing together the work of teams in the UK and Norway who have worked so hard to get us to this point. It is a great privilege to be involved in such important work—developing innovative electrical power systems is part of our sustainability strategy for the future.

Our generator is about the size of a beer keg but it needs to produce enough electricity to continuously power around 2,500 homes—that is breaking new ground in terms of what is physically possible. On completion of testing, we will have a basis for megawatt-level power for future hybrid aircraft.

Testbed 108 has a history that relates to a number of iconic aircraft engines. They include:

The testbed, which had been used as a storage facility from 2008, was completely renovated to accommodate hybrid-electric testing.

They say it is the size of a beer keg - but look at the image, looks more like a large barrel than a standard beer keg. (maybe one side is an electric motor and the other the generator).

+ history wise the Hercules and Centaurus engines were more '40s engines than '60s.