Mercedes-Benz Trucks celebrated the world premiere of its battery-electric eActros for heavy-duty short-radius distribution—its first series-produced electric truck. The standard model of the eActros is planned to roll off the production line in Wörth am Rhein (Germany) from autumn 2021. 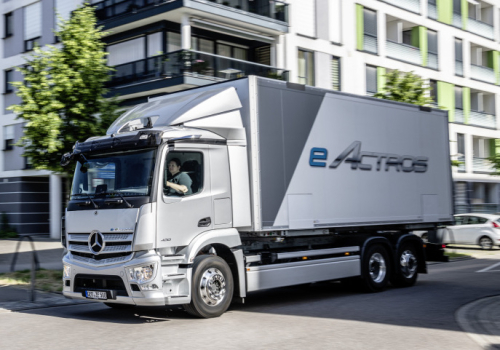 The findings from the "eActros innovation fleet" which started in 2018 and the close exchanges with customers have been incorporated into the development of the series-production model. Alongside this, proven features such as MirrorCam and the Multimedia Cockpit Interactive have been adopted in the standard specification.

The battery of the eActros series-production model is equipped with either three or four battery packs, each with an energy capacity of around 105 kWh. The maximum battery capacity of 420 kWh enables ranges of up to 400 kilometers (249 miles) to be achieved. 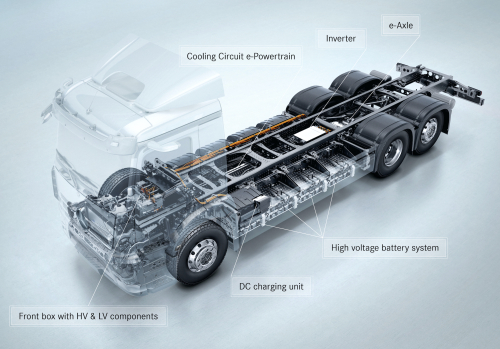 For the eActros, Mercedes-Benz Trucks is using a global platform architecture: the ePowertrain. The centerpiece of the electric truck is the drive unit—a rigid electric axle with two integrated electric motors and a two-speed transmission.

In comparison to the concepts with a central motor, this variant offers a number of advantages. For example, the more compact construction leaves a greater amount of installation space for a larger battery capacity. Compared with a central motor, the direct transmission of power which this concept enables also offers efficiency benefits.

The two motors are positioned centrally on the rear axle where they generate a continuous output of 330 kW and a peak performance of 400 kW. The immediate provision of torque by the electric motors coupled with the two-speed transmission ensures powerful acceleration, impressive driving comfort and driving dynamics which enable more relaxed, low-stress driving than a conventional diesel-powered truck.

In full-load operations, drivers enjoy a relaxing noise reduction of 10 dB inside the cab, which roughly corresponds to a halving of perceptible noise volume. Contrary to a diesel truck, there are also noticeably fewer vibrations.

If the vehicle is driven particularly foresightedly, recuperation enables the vehicle to recover electrical energy. The energy obtained in this way during braking is fed back into the batteries of the eActros and is again made available for use by the drive system.

The low-voltage on-board electrical network with two regular 12-volt batteries is charged from the high-voltage batteries using a DC/DC converter. In this way, even if the high-voltage electrical system fails or is switched off, all relevant vehicle functions such as the lights, turn signals, brakes, air suspension and cab functions remain operational.

The low center of gravity is also favorable when it comes to cornering. In full-load operations, drivers enjoy a pleasant noise reduction of 10 dB inside the cab, which roughly corresponds to a halving of perceptible noise volume. Due to the low noise level, night-time deliveries are also possible. Contrary to a diesel truck, there are also noticeably fewer vibrations.

The eActros can be charged with up to 160 kW: When connected to a regular 400A DC charging station, the three battery packs need a little longer than 1 hour to charge from 20 to 80 percent. A display in the standard Multimedia Cockpit Interactive of the eActros to keep the driver up-to-date on the charge level of the batteries and the remaining range, as well as the current and average energy consumption in kWh per 100 kilometers. 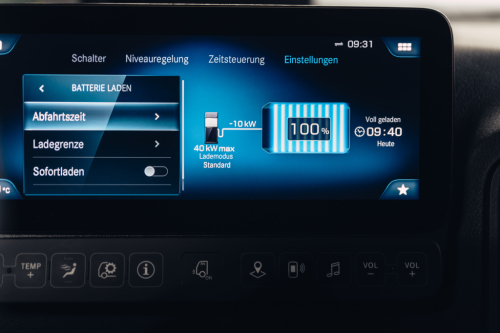 Numerous features and systems in the eActros ensure a high level of road safety for all concerned. For example, special crash elements with an aluminum profile protect the batteries in the event of a side-on crash, while sensors integrated in these can detect a crash scenario. In such a case, the HV battery would be automatically isolated from the rest of the vehicle. The driver also always has the option of actuating the HV shutoff at any time in the cab.

To ensure the vehicle is easier for road users like pedestrians and cyclists to hear, the eActros comes as standard with an external Acoustic Vehicle Alerting System (AVAS). Also assuring additional safety when turning off to the nearside is the Sideguard Assist which comes as standard on the eActros.

Another system which is part of the standard scope of equipment is the fifth-generation Active Brake Assist emergency braking system with pedestrian recognition. This can help to reduce the risk of a collision in the longitudinal direction on urban streets, out-of-town roads or motorways.

With all assistance systems, Mercedes-Benz Trucks aims to support the driver as much as possible within the respective limits of each system. However, as the law prescribes, the driver remains fully responsible for driving the vehicle safely at all times.