ZeroAvia has secured two twin-engine 19-seat Dornier 228 aircraft for the next phase of its research and development for clean hydrogen-electric aviation. (Earlier post.) One Dornier is in the UK, the other in the US, provided respectively by Aurigny and AMC Aviation. Both aircraft were previously in service for regional flights in the US and UK, demonstrating the opportunity for carbon reduction on existing routes. 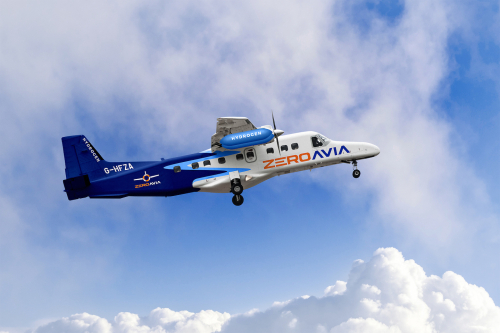 ZeroAvia’s 19-seat R&D is part of HyFlyer II, the second ZeroAvia-led project backed by the UK Government to target the development of a hydrogen fuel cell powertrain.

As part of HyFlyer I, ZeroAvia successfully demonstrated a 250kW powerplant in a 6-seat aircraft across three flight test campaigns, achieving all the project’s technical goals, including fuel-cell only cruise flight. All the learnings of HyFlyer I will be fully utilized in the development of a 600kW 19-seater powerplant in HyFlyer II.

This new funding complements the initial investment of $24 million the company announced a few weeks ago, bringing the total private investment into ZeroAvia large engine development for 50+ seat aircraft to $37 million.

For the 19-seat aircraft, two 600KW units of the company’s hydrogen-electric powertrain will replace the aircraft’s twin engines, along with hydrogen fuel tanks eventually holding 100kg of compressed gaseous hydrogen to support the 500-mile range of the commercial offering in 2024.

Additionally, ZeroAvia is progressing the software, hardware, mechanical integration, and fuel cell balance-of-plant to the certifiable state. The 6-ton aircraft will have a range of 500 nautical miles. 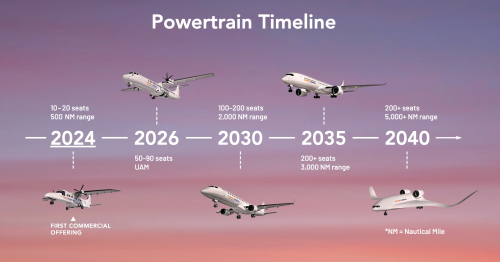 ZeroAvia’s new 30,000-square foot Kemble facility will act as the dedicated base for developing ZeroAvia’s 600kW engine class and marks a significant investment in and expansion of its UK-based R&D program. The company’s Hollister, California location will assist the UK team with testing and will be responsible for building the second demonstration aircraft for commercialization of technology in North America.

The company currently employs about 50 people, expanding to over 100 in the next 12 months across both the US and UK.

ZeroAvia and a number of other companies are doing great work towards the most technically challenging sector to de-carbonize.

What H2 research is Boeing doing? They where not present in this summit?

Let's see how far along their timeline they get.
(I wouldn't sweat the dates too much, although the investors might).
Fuel cell aviation is quite a task as you have to handle banks of fuel cells, high currents and voltages and powerful motors, while keeping the whole caboodle light and small.
Doing it on a train or truck or boat is one thing, they can be heavy without too much penalty. Not so on a plane.
However, once you get it going, range should not be such a problem, just use larger tanks, but more or less the same power.

' ZeroAvia and a number of other companies are doing great work towards the most technically challenging sector to de-carbonize.'

I applaud what Zero Avia and others are doing, but having just looked into it I reckon cement production is about the toughest major sector to decarbonise.

The problem is most of the CO2 emission is inherent to the process, not just external energy applied.

For those interested in this very much off topic subject, I discuss it with links here:

@Dave, yes, concrete and steel/iron are both big, earthbound problems.
You can save CO2 here without having to make the systems fly as well.

Concrete: Add carbon fibers to make it stronger and then use less of it.
Steel, as pointed out, you can use H2 to reduce the iron.

A combination of wind, solar and gas can work well for a national grid.
Even better if you have hydro or nuclear.

Ireland got to 43% renewables mainly from onshore wind and a small amount of hydro last year.
As long as you allow people to use fossil power when the wind doesn't blow and the sun doesn't shine, it all works. (Mind you, you'll have to have full coverage from fossil for the still, dark days or nights).

@Davemart,
Concrete is difficult. However, now there are some companies like CarbonCure, Solidia, and LC3(Limestone Calcined Clay Cement) that are working on reducing CO2 in Cement and Concrete. You can read about it here:"Carbon-sucking concrete is capturing attention and funding", https://www.greenbiz.com/article/carbon-sucking-concrete-capturing-attention-and-funding and in this detailed UN Report: "REACHING ZERO WITH RENEWABLES", https://www.irena.org/-/media/Files/IRENA/Agency/Publication/2020/Sep/IRENA_Reaching_zero_2020.pdf.

ZeroAvia made a good choice with Dornier 228 since DLR and MTU chose the same airframe for their FC aircraft; "DLR and MTU Aero En­gines study fu­el cell propul­sion sys­tem for avi­a­tion", https://www.dlr.de/content/en/articles/news/2020/03/20200805_dlr-and-mtu-aero-engines-study-fuel-cell-propulsion-system-for-aviation.html.
DLR/MTU will only change one engine to a 500 kW FC+electric motor (both in the nacelle), keeping one Honeywell TPE331 turboprop engine for safety purposes (standard aviation practice).
MTU also views direct combustion of liquid hydrogen in gas turbine engines as a potentially faster means of adopting the alternative fuel.
Wonder if another "liquid hydrogen carrier could be used, e.g. Hydrogenious LOHC?
The existing fuel tanks could store the LOHC and with the HyPoint HT-PEM like ZeroAvia wants to use would solve two problems: releasing the H2 requires heat and the FC waste heat is removed from the aircraft,
Can this be done in the aircraft, possibly?
This article discusses LOHC in a train based scenario ( though weight of the H2 Release Unit is not as critical as an aircraft) - "Reliability of liquid organic hydrogen carrier-based energy storage in a mobility application", https://onlinelibrary.wiley.com/doi/pdf/10.1002/ese3.646.