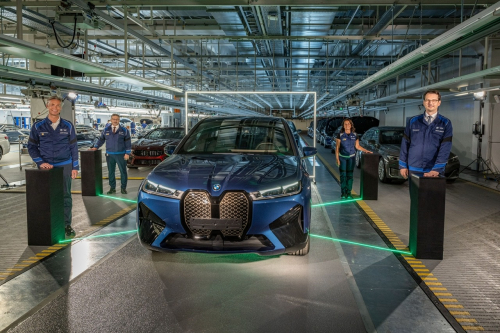 The BMW iX is being manufactured at the BMW Group’s largest European production plant on an assembly line with the flexibility to build a mix of BMW 5 Series, 7 Series and 8 Series models. To handle this flexibility and variety of drive trains, vehicle assembly in Dingolfing has been expanded and refurbished. The BMW Group has invested a total of more than €400 million in producing the BMW iX at the Dingolfing vehicle plant.

Many of the remodelling and structural measures required for the BMW iX are already benefiting future generations of the BMW 7 Series and 5 Series that will come off the production line in Dingolfing in the coming years. Fully-electric variants have also been announced for both model ranges.

The BMW iX introduces a multitude of innovations to the product and production processes at the plant—especially in the vehicle’s electrical system architecture, software, digital services, connectivity and automated driving functions. As a result, the vehicle plays an important role as a trailblazer and is making Dingolfing “e-car” and “smart-car ready” as the BMW Group’s primary plant for the luxury class.

The BMW iX is also an important trailblazer in production, bringing future technologies into the production system—such as digital methods for employee training, automation of logistics processes, virtual commissioning and validation of driver assistance systems.

The BMW iX will already be one of the highest-volume model at the location by next year.

—Milan Nedeljković, member of the Board of Management of BMW AG, responsible for Production

The BMW iX will be followed in the autumn by the BMW i4, which will be built in Munich. At the end of next year, all German plants will be producing at least one fully-electric vehicle.

The highly integrated e-drive and fifth-generation battery, as well as the complete electric axle are produced on site, together with the Dingolfing component plants. Production capacity will be systematically expanded and, from 2022, Dingolfing will be able to produce e-drives for more than half a million electrified vehicles.