Europe’s demand for biodiesel for cars and trucks has likely wiped out forests the size of the Netherlands since the introduction of the EU’s green fuels law in 2010, according to a new study by Transport & Environment (T&E). T&E is calling on the EU to end support to palm and soy biodiesel immediately to avoid further deforestation, habitat loss and greater CO2 emissions than the fossil diesel it replaces.

The European Renewable Energy Directive (RED) was introduced in 2010, setting a 10% renewable energy target for transport by 2020 for each member state. This drove up demand for cheap crop-based biodiesel, such as palm and soy oil, which is mainly sourced from Asia and South America. 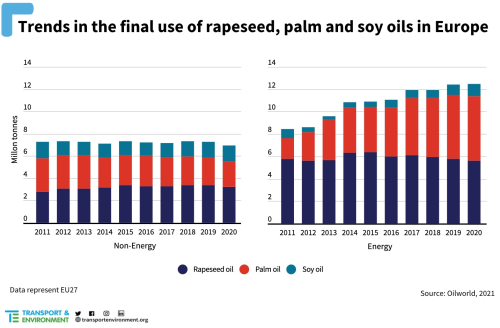 The study finds that it is likely that roughly 4 million hectares of forests have subsequently been razed, destroying an estimated 10% of the world’s remaining orangutan habitats.

Europe has burned around 39 million tonnes of palm and soy biodiesel alone in its cars and trucks since 2010. T&E says the EU needs to phase-out support to all crop biofuels by 2030 at the latest in its upcoming ‘Fit for 55’ package, under the RED review.

Virgin vegetable oils (rapeseed, palm, soy) made up almost 80% of the feedstock used in EU biodiesel production in 2020 and total demand for biodiesel went up, despite overall demand for fuel shrinking during the pandemic.

Some European countries increased their biofuels blending, while others kept volumes constant to meet EU compliance targets. Palm oil reached its highest level, capping a decade of growth that has seen palm oil consumption treble. There was little difference in the use of rapeseed and used cooking oil (UCO), while soy volumes grew 17% and animal fats by 30% compared to 2019.

There was also a rapid increase (23%) in the share of domestically produced hydrotreated vegetable oil (HVO) in the diesel pool, which requires significantly more vegetable oil than traditional methods. The capacity for HVO production is set to almost double in the next 5 years, driven by new projects from oil majors including Total, ENI and Neste.

The updated REDII, adopted in 2018, plots a path away from palm oil. Palm oil biodiesel use will be frozen at 2019 volume levels and then, from 2023, progressively phased out by 2030 in the EU's green targets. For T&E this is too late, and there is a risk that palm oil will simply be replaced by soy and other vegetable oils, which also drive deforestation.

The yield for palm oil is 3.16 tonnes per hectare whereas for soy oil it is 0.5 tonnes per hectare. The EU’s maximum annual consumption over the last decade of these feedstocks used for biodiesel is used to calculate the amount of land, assumed to have displaced forests, resulting in 4 million hectares.

Not everything intended o promote the environment does so, unfortunately.

Biodiesel made from food crops is not the solution. There are exciting developments in the production of renewable diesel from organic waste that will simultaneously solve the garbage crisis while reducing GHG emissions.

Good points! The Transport & Environment web site has some other good posts, like
"Private jets: can the super-rich supercharge zero emission aviation?"
It calculates that a jet fuel tax applied proportionately to flight distances could raise €325 million if applied to all private flights departing from the EU and UK. If some of that money could be reserved for making green hydrogen and electric planes a reality, then the richest flyers would be indirectly paying towards cleaning up aviation.
https://www.transportenvironment.org/news/could-super-rich-super-polluters-private-jets-clean-aviation.
Or "Making aviation fuel mandates sustainable" which promotes advanced biofuels,
(done correctly based on true wastes and residues) and the use of e-fuels for the aviation sector.
One company that may lead the world in e-fuels is Zero Petroleum. The company is the brainchild of Paddy Lowe and his business partner Professor Nilay Shah, Head of the Department of Chemical Engineering at Imperial College.
Paddy Lowe was formerly the executive director of the Mercedes Formula One (F1) racing team and now F1 plans to move to e-fuels in 2025.