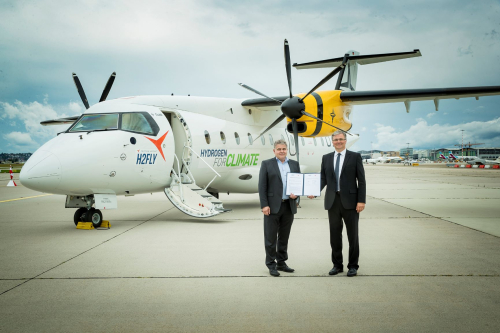 The partnership will see the two companies convert the Dornier 328 aircraft for hydrogen flight, with the demonstrator aircraft expected to take to the skies in 2025.

The program is expected to validate the potential for hydrogen to deliver climate-neutral regional air travel with up to 40 seats, while demonstrating German leadership in this important field.

Having grown out of a partnership between the German Aerospace Center (DLR) and the University of Ulm, H2FLY has demonstrated innovative hydrogen fuel cell technology in aviation. The four-seater hydrogen-electric-powered HY4 (earlier post) proved successfully in multiple flight campaigns and more than 70 take-offs the applicability of this technology in aviation. With its range of up to 750 km (466 miles), regional markets can be developed.

The teams planning to equip the demonstrator aircraft with a 1.5 MW hydrogen system, making it the most powerful hydrogen-electric-powered aircraft to date.

The project will see the companies work together on integrating the power system into the aircraft as well as defining the specific technical and certification requirements for fuel cell systems in EASA’s large aircraft class (CS25). The project is designed to complement the German Federal Government’s Aviation Strategy.

From 2035 onward hybrid-electric flying has to be the new standard in Germany. I am happy about the agreed technological cooperation for a sustainable aviation made in Germany. The German Government will continue to support this path to innovation with its R&D funding program aiming to let the vision of a Zero-Emission Aircraft become reality.

—Thomas Jarzombek, Member of the German Bundestag, Coordinator of the Federal Government for German Aerospace