Crowley to build and operate the first all-electric US tugboat to serve Port of San Diego; eWolf

Crowley Maritime Corporation will build and operate eWolf, the first all-electric powered harbor tugboat. The 82-foot vessel with 70 tons of bollard pull advances Crowley and the maritime industry’s efforts toward sustainability and decarbonization.

Over the first 10 years of its use, the operation of the new eTug will reduce 178 tons of NOx, 2.5 tons of diesel particulate matter, and 3,100 metric tons of CO2 versus a conventional tug. The electric tug will replace one that consumes more than 30,000 gallons of diesel per year. The eTug will operate at the Port of San Diego’s Tenth Avenue Marine Terminal and will be operational by mid-2023. 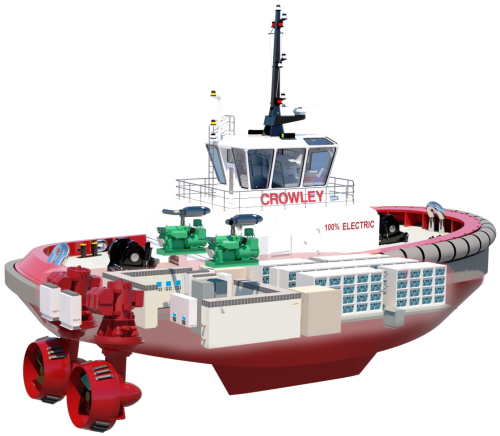 The eTug will be built by Master Boat Builders in Coden, Ala., utilizing the design and on-site construction management by Crowley Engineering Services and its recently integrated Jensen Maritime naval architecture and marine engineering group. The eTug’s battery system will be charged at a specially designed, shoreside station developed with Cochran Marine.

The eWolf will feature a design that allows the vessel to operate fully electric with full performance capabilities. The eTug will feature a fully integrated electrical package provided by ABB.

The vessel will be powered by Corvus 6.2 MWh battery packs, with two 2100 kW RAMME motors and Schottel Azimuthing Thrusters. With 360-degree visibility, the eTug will also feature ABB’s artificial intelligence technology (AI) to increase safety and efficiency for mariners and provide sustainable performance with the reliability that customers demand.

The eTug will be a result of a partnership among Crowley, the San Diego County Air Pollution Control District, the California Air Resources Board, the Port of San Diego, the US Environmental Protection Agency and the US Maritime Administration, which all provided financial support and other resources.