Electrify America announced its “Boost Plan” to more than double its current electric vehicle (EV) charging infrastructure in the United States and Canada, with plans to have more than 1,800 fast charging stations and 10,000 individual chargers installed by the end of 2025. The expansion will increase the deployment of 150 and 350 kilowatt chargers—the fastest speed available today. 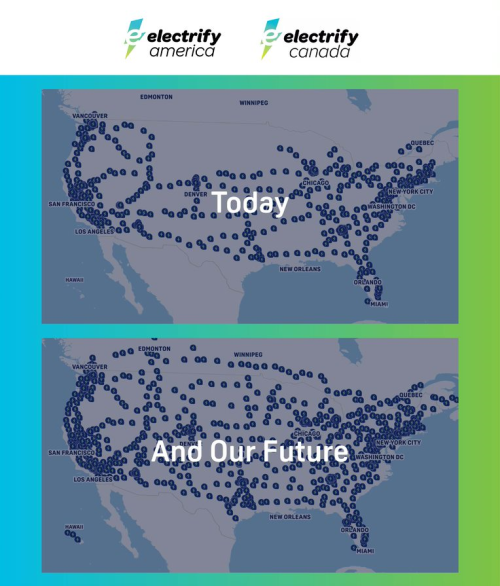 The announcement expands Electrify America’s previous commitment to invest $2 billion over 10 years in Zero Emission Vehicle (ZEV) infrastructure, education, and access in the US.

In addition to adding to its existing network in the US, Electrify America will also expand its Electrify Canada charging network which began installations in 2019. Both initiatives are part of a global announcement today by the parent company Volkswagen Group to substantially increase public charging infrastructure in North America, Asia and Europe.

Electrify America is the largest, open DC (Direct Current) Fast Charging network in the US. This new commitment builds on the company’s plans to have about 800 charging stations and approximately 3,500 individual chargers in the US by the end of 2021 and will increase the total number of charging stations to more than 1,700 and 9,500 individual chargers by the end of 2025.

The company has installed on average four stations per week since its first charging station opened a little over three years ago in May 2018.

As part of the expansion, Electrify America will not only multiply its presence in established US regions, but also add the states of Hawaii, North Dakota, South Dakota, West Virginia, Wyoming and Vermont, bringing Electrify America’s network to 49 US states and the District of Columbia.

Building upon Electrify America’s current two cross-country and two coastal routes for cross-country travel, part of this expansion will add a new electric vehicle charging highway to the upper Midwest, providing necessary EV infrastructure to enable electric mobility in the region. The additional investment will enhance and grow current ultra-fast charging stations in cities where Electrify America already operates, as well as expand upon offerings in regions such as the California Central and San Joaquin Valleys and many new cities such as Austin, Detroit and Minneapolis/St. Paul.

Electrify Canada will increase its current commitment of 32 stations to more than 100 charging locations and 500 chargers over the next 4.5 years. The 68 additional charging stations will continue Electrify Canada’s focus on providing electric vehicle charging at strategic locations in metropolitan centers, along major highways and near popular amenities.

Electrify Canada will expand its network to nine provinces, adding stations in Saskatchewan, Manitoba, New Brunswick, Nova Scotia and Prince Edward Island, providing the ability for most electric vehicles to travel from Halifax, Nova Scotia in the east, along an Electrify Canada route to Victoria, British Columbia in the west.

The company will also bolster its network in the four provinces it currently offers service increasing the number of stations in British Columbia, Alberta, Ontario and Québec.