Now, Factorial Energy announced that the company’s initial round of testing of the 40 Ah cell cycle behavior at 25 ˚C demonstrated a 97.3% capacity retention rate after 675 cycles. 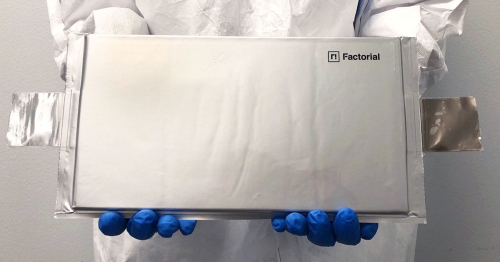 Solid-state batteries have struggled in the past to scale-up cell capacity. Factorial’s successful cell performance results indicate that the company has overcome this challenge and is leading the field in solid-state battery electric vehicle (EV) application. The testing marks a major performance milestone for Factorial’s technology as the company heads to market and continues discussions with several automakers on supporting the research and manufacturing of EV battery cells.

Factorial’s Factorial Electrolyte System Technology (FEST) is a proprietary solid electrolyte material that enables safe and reliable cell performance with high-voltage and high-energy density electrodes. Unlike any others on the market, Factorial’s drop-in battery technology also can be easily integrated into the existing lithium-ion battery manufacturing infrastructure, the company said.

Former Chairman and CEO of Panasonic Corporation of North America Joe Taylor serves as Factorial’s executive chairman. Dieter Zetsche, the former chairman of the Board of Management of Daimler AG and Head of Mercedes-Benz; Mark Fields, former Ford Motor Company CEO; and Harry Wilson, former senior advisor to the Obama Administration’s Presidential Task Force on the Auto Industry, serve on Factorial’s advisory board.

If I could make a polite suggestion. Write your comment in Spanish if that is easier but also include a Google Spanish to English translation as more of the people reading it will be able to understand English.

Monitor the site ban those that are insulting

More like, ban the ones who are spamming.  Who do you think does that around here, anyway?