Renewables are expanding quickly but not enough to satisfy a strong rebound in global electricity demand this year, resulting in a sharp rise in the use of coal power that risks pushing carbon dioxide emissions from the electricity sector to record levels next year, according to a new report from the International Energy Agency.

After falling by about 1% in 2020 due to the impacts of the Covid-19 pandemic, global electricity demand is set to grow by close to 5% in 2021 and 4% in 2022, according to the latest edition of the IEA’s semi-annual Electricity Market Report released today. The majority of the increase in electricity demand is expected to come from the Asia Pacific region, primarily China and India.

More than half of global growth in 2022 will occur in China, the world’s largest electricity consumer. India, the third-largest consumer, will account for 9% of global growth.

Based on current policy settings and economic trends, electricity generation from renewables—including hydropower, wind and solar PV—is on track to grow strongly around the world over the next two years—by 8% in 2021 and by more than 6% in 2022. But even with this strong growth, renewables will only be able to meet around half the projected increase in global electricity demand over those two years, according to the new IEA report. 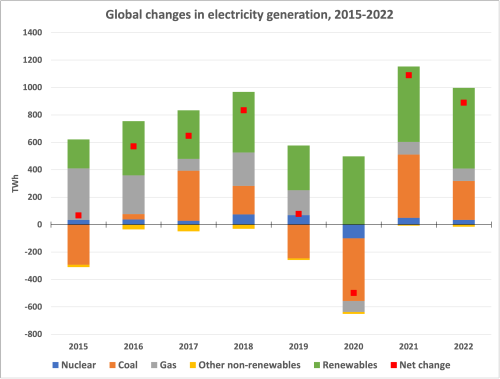 Renewable growth has exceeded demand growth in only two years: 2019 and 2020. But in those cases, it was largely due to exceptionally slow or declining demand, suggesting that renewables outpacing the rest of the electricity sector is not yet the new normal.

Renewable power is growing impressively in many parts of the world, but it still isn’t where it needs to be to put us on a path to reaching net-zero emissions by mid-century. As economies rebound, we’ve seen a surge in electricity generation from fossil fuels. To shift to a sustainable trajectory, we need to massively step up investment in clean energy technologies—especially renewables and energy efficiency.

—Keisuke Sadamori, the IEA Director of Energy Markets and Security

In the pathway set out in IEA’s recent Roadmap to Net Zero by 2050, nearly three-quarters of global emissions reductions between 2020 and 2025 take place in the electricity sector. To achieve this decline, the pathway calls for coal-fired electricity generation to fall by more than 6% a year.

However, coal-fired electricity generation is set to increase by almost 5% this year and by a further 3% in 2022, potentially reaching an all-time high, according to the Electricity Market Report. Gas-fired generation, which declined 2% in 2020, is expected to increase by 1% in 2021 and by nearly 2% in 2022.

The growth of gas lags that of coal because it plays a smaller role in the fast-growing economies in the Asia Pacific region and it faces competition from renewables in Europe and North America.

Since the IEA’s last Electricity Market Report in December 2020, extreme cold, heat and drought have caused serious strains and disruptions to electricity systems across the globe in countries ranging from the United States and Mexico to China and Iraq. In response, the IEA is establishing an Electricity Security Event Scale to track and classify major power outages, based on the duration of the disruption and the number of affected customers. The Texas power crisis in February, where millions of customers were without power for up to four days because of icy weather, was assigned the most severe rating on this scale.

What politicians worldwide either don't know or simply ignore.
1) Natural laws in contrast to human laws are not flexible; they cannot be bent or catered to suit any advantageous principle.
2) Nature does not negotiate, it responds in accordance with valid universal principals; cause and effect.
Get it straight and start reacting responsibly!