A new study from WCS (Wildlife Conservation Society) and WWF finds that nearly 20% of tropical Intact Forest Landscapes (IFLs) overlap with concessions for extractive industries such as mining, oil and gas. The total area of overlap is 376,449 square miles (975,000 square kilometers), about the size of Egypt. The open-access study is published in Frontiers in Forests and Global Change. 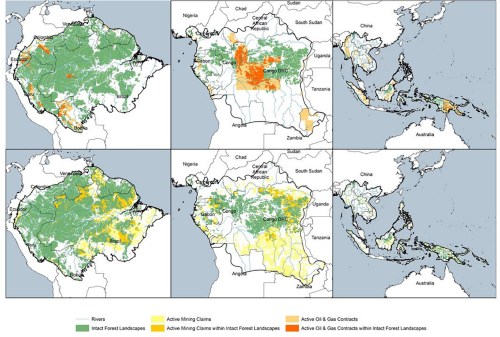 IFLs represent some of the last places on Earth that still contain species assemblages at near-natural levels of abundance. According to 2013 estimates, 549 million acres of intact tropical forests remain. Only 20% of tropical forests can be considered “intact,” but those areas store some 40% of the above-ground carbon found in all tropical forests. At least 35% of intact forests are home to, and protected by, politically and economically marginalized Indigenous Peoples.

Intact forests are declining rapidly, with more than 7 percent of their total area lost between 2000 and 2013. While the growth of extractive industries is recognized as a threat to IFLs, the extent of this threat has not been well understood prior to this study, the authors said.

Of these regions, Central Africa’s IFLs had the highest overlap with extractive concessions (26%). In addition, they identified the specific stages of extractive projects overlapping with IFLs, and found that most leases are in the exploration stage.

The authors recommend that companies incorporate avoidance planning in the design phase of extractive projects, taking into account the most important intact forest areas. Ideally, coordination with governments will allow for landscape-scale planning. The authors encourage governments not to allocate extractives concessions within IFLs where possible.

This "research" smells like FUD paid for by ExxonMobil and others leading us to a Mad Max world.