Study suggests widespread use of EVs may negatively impact land use

In an open-access study published in the journal Sustainable Cities and Society, Francesco Orsi, of the Landscape Architecture and Spatial Planning Group, Wageningen University & Research, the Netherlands, suggests that widespread adoption of electric vehicles may have a negative impact on land use.

Electric vehicles (EVs) are widely regarded as the key to finally making private mobility clean, yet virtually no research is being conducted on their potential contribution to the expansion of impervious surfaces. This study aims to start a discussion on the topic by exploring three relevant issues: the impact of EVs’ operating costs on urban size, the space requirements of charging facilities, the land demand of energy production through renewables. 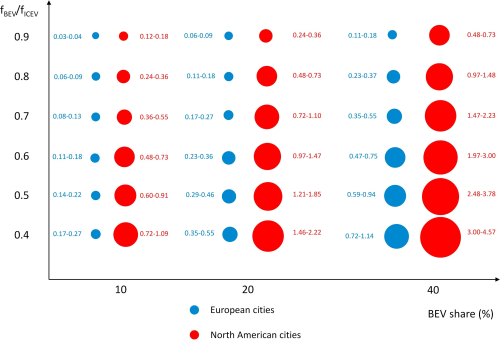 Predicted percent increase of the built-up area of European and North American cities for various shares of BEVs out of the total vehicle fleet (10%, 20%, 40%) and different ratios of electricity price to gas cost on a per unit distance basis (fBEV/fICEV). Upper and lower values reflect ratios of high density to low density of 2 and 4, respectively. Orsi 2021.

Further, while the creation of charging spaces would have only minor effects in terms of overall land requirements, easier charging in detached and semi-detached homes might increase the appeal of this land-intensive dwelling types.

From a spatial planning perspective, the amazingly low operating costs of EVs compared to ICEVs on a per unit distance basis are a major concern as savings accrued when shifting to electric mobility may stimulate more driving and therefore sprawl. In fact, our estimates suggest EV owners might drive way more (up to 18% more) than they used to, even when shifting from very efficient ICEVs, unless ad hoc taxation is imposed on EVs.

The subsequent increase in urban impervious surfaces, though possibly limited percent-wise, might be considerable area-wise, especially in large cities. For example, in a city with 300 km2 of impervious surfaces (e.g. Lyon, France; Tampa, FL, USA), a mere 0.5 % increase of these would imply the loss of 1.5 km2 of natural land: an asset that, if covered with trees, could capture 900 tons of CO2 annually and, if cultivated, could yield around 600 tons of cereals per year. Impacts would be particularly bad in North American cities, where increases in artificial land area of 1% or more would be almost inevitable if BEV use became widespread, and still probable if their diffusion were moderate and electricity cheap.

I don't get it. Solar panels and wind turbines are not impervious surfaces, and you don't put them in major cities. As a New Mexico resident, let me say that we can easily accommodate the 50K sq km to generate 1TW on land fit to grow only the scrubbiest of scrub and vinegaroons.

I'm with you on that Albert. Have they also accounted for parking lots covered with solar, and crops grown under solar in drought areas etc.? I think they have a very European perspective.