Study: annual climate impact of wild pigs could be greater than 1.1M cars

By uprooting carbon trapped in soil, wild pigs (feral swine), are releasing around 4.9 million metric tonnes of carbon dioxide annually across the globe, the equivalent of 1.1 million cars, according to a new study by an international team led by researchers from The University of Queensland and The University of Canterbury. Their study appears in Global Change Biology. 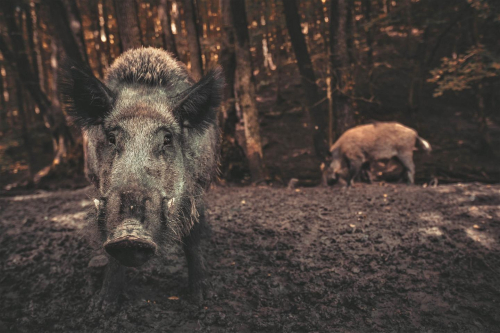 Wild pigs are just like tractors ploughing through fields, turning over soil to find food. When soils are disturbed from humans ploughing a field or, in this case, from wild animals uprooting, carbon is released into the atmosphere. Since soil contains nearly three times as much carbon than in the atmosphere, even a small fraction of carbon emitted from soil has the potential to accelerate climate change.

Our models show a wide range of outcomes, but they indicate that wild pigs are most likely currently uprooting an area of around 36,000 to 124,000 square kilometers, in environments where they’re not native. This is an enormous amount of land, and this not only affects soil health and carbon emissions, but it also threatens biodiversity and food security that are crucial for sustainable development.

They then modeled the amount of soil area disturbed from a long-term study of wild pig damage across a range of climatic conditions, vegetation types and elevations spanning lowland grasslands to sub-alpine woodlands. The researchers then simulated the global carbon emissions from wild pig soil damage based on previous research in the Americas, Europe, and China.

The researchers note that the results are highly uncertain, due to variability in wild pig density and soil dynamics. This uncertainty points to an urgent need for more research on the contribution of wild pigs to soil damage.

University of Canterbury PhD candidate Nicholas Patton said the research would have ramifications for curbing the effects of climate change into the future.

Invasive species are a human-caused problem, so we need to acknowledge and take responsibility for their environmental and ecological implications. If invasive pigs are allowed to expand into areas with abundant soil carbon, there may be an even greater risk of greenhouse gas emissions in the future.

Because wild pigs are prolific and cause widespread damage, they’re both costly and challenging to manage. Wild pig control will definitely require cooperation and collaboration across multiple jurisdictions, and our work is but one piece of the puzzle, helping managers better understand their impacts. It’s clear that more work still needs to be done, but in the interim, we should continue to protect and monitor ecosystems and their soil which are susceptible to invasive species via loss of carbon.

Feral swine have been reported in at least 35 states. Their population is estimated at more than 6 million and is rapidly expanding. Range expansion over the last few decades is due to a variety of factors including their adaptability to a variety of climates and conditions, translocation by humans, and a lack of natural predators.

In an open-access paper on the impact of feral pigs on terrestrial biodiversity, published in Scientific Reports, Risch et al. note that:

Wild pigs are identified as one of the “100 of the World’s Worst Invasive Alien Species” alongside other more frequently discussed invasive terrestrial species such as cats (Felis catus) and rats (Rattus rattus). However, pigs are unique among other problematic terrestrial invasive species in that they are omnivorous generalists and function as both large predators and herbivores throughout their native and non-native range.

They have been documented predating upon a variety of vertebrate and invertebrate species in island and continental ecosystems, disturbing nest sites and plant assemblages, hybridizing with other endangered Suidae, competing with native fauna, and acting as vectors for disease transmission. In addition to their direct impacts on both wildlife and plant communities, they are generally known to disturb ecosystem structure due to their unique rooting and digging behavior Consequentially, pigs are considered ecosystem engineers, having considerable secondary effects on organisms by physically altering habitat characteristics. Despite these well-documented impacts from wild pigs on species and ecosystems, the degree to which wild pigs pose a threat to biodiversity at large is still largely unknown.

Hmmm! Which "pigs" are they talking about? 'The two legged - or the four legged ones or both types.

They hunt in packs of 30-50 and the only thing to stop them is an assault rifle.

This is a irrelevant store power plant carbon