Advocacy group Coltura has published a report that finds converting the biggest users of gasoline to EVs in the next ten years is critical to reaching climate goals and that present EV policies are poorly suited to accomplishing that conversion.

The report, “Gasoline Superusers,” presents the data available on drivers in the top 10% of gasoline consumption—the so-called “gasoline superusers.” It analyzes EV incentives and other policy options for transitioning superusers to EVs and presents a model for achieving significant cuts in gasoline consumption by 2030. 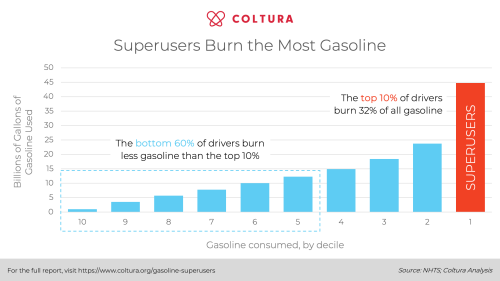 This is the first published study identifying the demographic characteristics of gasoline superusers and calling for EV incentive programs and other policies to focus on maximizing gasoline displacement. Getting gasoline superusers into EVs as quickly as possible is critical to hitting our climate goals because they consume a third of US gasoline.

—Matthew Metz, the lead author of the report and founder and co-executive director of Coltura

The current flat EV incentives are being used primarily by higher-income drivers who tend not to use much gasoline. The people who use the most gasoline are more evenly spread across the income spectrum, and many lower-income gasoline superusers spend upwards of 20% of their household income on gasoline. It’s more equitable as well as more efficient to give these drivers the biggest incentives to switch to EVs.

—Janelle London, co-author of the report

Among the findings of the report:

Consumption would be calculated by using total miles driven by the current owner, years owned, and the EPA fuel economy rating.

So - 30348 miles per year averages to 83 miles per day or 117 miles per week day: well within the capacity of larger battery EVs - if they drive a roughly constant mileage per day, which is likely for people with long commutes and unlikely for people who are using their vehicles for work.
I'd work on the long commuters first as they have more predictable driving needs and maybe more money.
The solution for the "work drivers" may be to wait till vehicles get cheap enough and have enough range or charger networks to make long, variable driving viable.
In both cases, you need a dense fast charger network and the ability to charge at home or in work (which is usually cheap).
Charging in fast charger networks may be convenient, but it isn't cheap. (Tesla > model 3 drivers might disagree).

Work where it is most likely to do the most good

Another way to encourage high mileage drivers to go electric would be to increase the cost of gasoline and diesel with taxes (and spend the tax on charging infrastructure).