The ICCT has conducted a comprehensive global and temporal life-cycle assessment of GHG emissions from a variety of alternative passenger car powertrains and fuels. The results show there is no realistic pathway to full decarbonization of internal combustion engine vehicles, and that only battery and hydrogen fuel-cell EVs have potential to be very low-GHG passenger vehicle pathways.

ICCT’s analysis, “A global comparison of the life-cycle greenhouse gas emissions of combustion engine and electric passenger cars,” looked at four separate, globally representative regions—the European Union, the United States, China, and India—and captured the differences among those markets, which together account for about 70% of new car sales worldwide.

The life-cycle GHG emissions of cars registered in 2021 are compared with those of cars expected to be registered in 2030. In addition to its regional and temporal scope, this study is distinct from earlier LCA literature in four key aspects:

Natural gas does not offer climate benefits compared to gasoline and diesel, and many biofuel pathways do not, either. There will not be sufficient supply of very low-GHG biofuels, biogas, and e-fuels to decarbonize internal combustion engine vehicles, according to the ICCT. Drivers of plug-in hybrid electric vehicles rely too much on the gasoline engine for this pathway to be a long-term climate solution, the ICCT said. 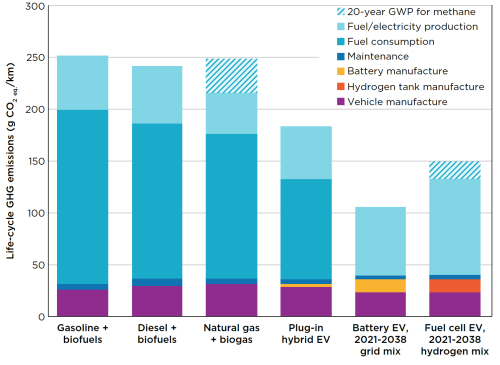 Only full battery electric vehicles (EVs) and hydrogen fuel-cell EVs have the potential to be very low-GHG pathways, and the emissions from manufacturing batteries, solar panels, and wind turbines are small when compared to the GHG savings from the greater efficiency and cleaner energy supply of EVs compared to conventional vehicles, according to the report.

Importantly, battery EVs can be expected to operate with progressively fewer upstream emissions over their lifetimes as electricity grids “green.” The average useful lifetime of a passenger car is between 15 and 18 years (for trucks and buses, it is often even longer), and this study finds the bulk of a vehicle’s life-cycle GHG emissions come from fuel and electricity production and consumption. Thus, decarbonization policies will be most impactful if they reflect passenger cars transitioning to all EVs for new sales by the early 2030s, in order to achieve deep decarbonization of the transport sector by 2050. 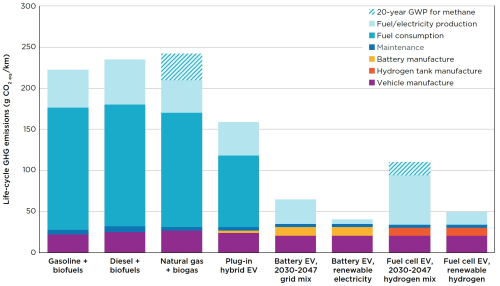 Life-cycle GHG emissions for global typical medium-size passenger cars registered in 2030. The effect of rising renewable energy penetration becomes more pronounced in the lifetime climate performance of cars registered in the year 2030; the life-cycle GHG emissions of both battery and hydrogen fuel-cell EVs are much lower for 2030 cars than 2021 cars. The GHG emissions of gasoline, diesel, and natural gas cars, on the other hand, are almost identical. The relative benefit of driving EVs compared to gasoline, diesel, and natural gas cars grows over time. Source: The ICCT.

Although China and India rely more heavily on coal in electricity generation, even in these countries, battery EVs offer a clear climate benefit compared to gasoline cars, according to the report. In all regions, the GHG emission benefits of battery EVs increase over time. 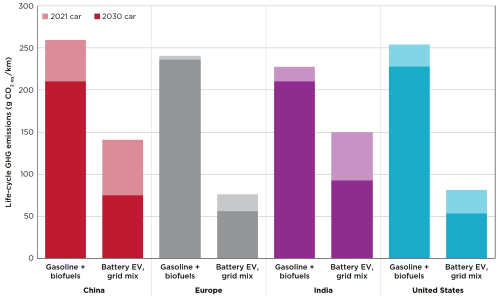 Life-cycle GHG emissions for medium-size gasoline and battery-electric passenger cars registered in 2021 and 2030 in China, Europe, India, and the United States. Source: The ICCT.

The analysis makes policy recommendations to promote the adoption of electric vehicles and help decarbonize their life-cycle: